In February, 2010, the Robbins Company invited to Corpus Christi, Texas/USA, to join the launch and assembly of three EPBs for the Emisor Oriente Project in Mexico City. During the ceremony we asked Lok Home, President of The Robbins Company, Kent, WA/USA, some questions about present and future of the company.

tunnel: How would you describe Robbins’ position at present given the difficult economic situation?

Lok Home: Robbins just finished one of its most profitable years in 2009 and has a large backlog going into 2010. New tunnelling projects are being funded, which give us plenty of opportunity. It is obvious Robbins has regained its position as a leading supplier.

tunnel: In which countries/regions is Robbins particularly successfully at present – and why?

Lok Home: Robbins is particularly successful in China, India, USA and Mexico. There are several reasons for this success: Robbins TBMs have historically had good performance rates, and in foreign markets we have set up local companies staffed by local managers and supported by our experienced staff. The local staff in each of these countries is backed and integrated by our design and service specialists. We at Robbins are selective about our projects and ensure that we have the right TBM features for each particular set of conditions. As a result, it is rare that we have a “stuck” machine for any period of time.

tunnel: Which technical developments have been the most important for Robbins over the last five years or so?

Lok Home: Our entry into the soft ground market using EPB TBMs has been an important development. We planned the entry well and were able to take significant market share in a short period of time, with not one significant problem project to date. It is evident that our experience with rock gives us advantages when it comes to mixed face EPBs. The technology for soft ground turned out to be significantly less demanding than rock boring technology.

In addition, we are now providing continuous conveyor systems soft ground, mixed, and hard rock conditions. Recent conveyor designs have achieved over 90 % availability behind our soft ground TBMs and are proving a viable alternative to muck cars.

tunnel: How would you outline the future of your company? Which innovations/improvements have you got up your sleeves for the next five years or so?

Lok Home: Robbins’ future is good for two reasons: the worldwide tunnel market is very positive and growing; and I think we have a better business model than our competitors. Our quality products and our flexible manufacturing strategy stand us well in the industry.

For the next five years we are focusing on several areas: Onsite First Time Assembly (OFTA) is an obvious a winner, as it saves both time and money by allowing TBMs to be initially assembled at the jobsite. The industry is quickly realizing the benefit of OFTA.

We are spending a lot of effort on making TBMs successful in conditions where only NATM would have been previously considered.

Our truly international approach to sourcing and manufacturing will keep our prices competitive and our overheads flexible.

The launch of three TBMs was celebrated in the cutterhead turning of one fully assembled, 8.93 m (29.3 ft) diameter machine. The TBMs are headed to Mexico City’s Emisor Oriente project, a 62 km (39 mi) long wastewater line that will prevent flooding and increase capacity by its completion in 2012.

After their assembly in Corpus Christi, the Robbins machines were shipped via freighter to Veracruz, then by truck to three different shaft launching sites in spring 2010. These machines are specially designed for the unique geology of Mexi­co. They have been engineered to handle a face of mostly clay with some basalt rock.

Located in the Valley of Mexico City, the geology of the capital consists of a drained lake bed with clays, interspersed with volcanic rock and boulders from long dormant, buried volcanoes in the area. The TBMs will utilize clay spades and drag bits that can be changed out for 17-inch disc cutters depending on the geology. Two-stage screw conveyors will help to regulate high water pressures of up to 10 bar– some of the highest pressures EPBs have ever operated under. An initial 900 mm (35 in) diameter ribbon-type screw conveyor will accommodate expected boulders up to 600 mm (24 in) in diameter. Contractor CARSO Infraestructura y Con­strucción, S.A. de C.V. will utilize the TBMs on lots 3, 4, and 5, each between 9.5 and 9.7 km (5.9 to 6.0 mi) in length.

The Emisor Oriente line will utilize a total of six TBMs, and will add about 150 m3 of water per second (5,300 ft3/sec) once complete. The project will operate in parallel with the city’s aging main wastewater line, Emisor Central. Since the central line was built in 1964, Mexico has sunk at the rate of 10 cm (4 in) annually, causing the drainage system pipe to lose its slope. In addition, the Emisor Central’s concrete and rebar walls have been severely degraded by corrosive gases, leaving areas of the city at risk for flooding.

It is planned to publish a detailed article about the project in a coming tunnel issue. 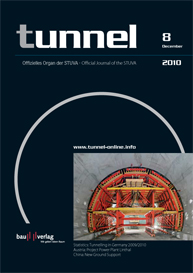 Dry Ground for Mexicos Capital: Half the Tunneling-Work is done

The drainage system of the metropolitan region is no longer sufficient to maintain an adequate water discharge, especially due to the increasingly unfavourable gradient of the Emisor Central...

If the tunnel-geology ranges from soft soils to weathered rock, the Robbins Company offers a solution: The Earth Pressure Balance Machine (EPBM). EPBMs are built for durability and longevity with a...