The attention of the public is drawn to tunnels should an accident cause fatalities or if a motoring association refers to a structure’s lack of safety. The tunnels, which are then featured in the gutter press or the car magazines, are usually underpasses on motorways or rail routes. The Pörzberg Tunnel at Schaala in Thuringia nonetheless shows that even a relatively small tunnel with 2-way traffic must and can fulfil the highest safety requirements.

The Pörzberg Tunnel is part of the upgraded L 1048 highway produced to improve linking the Saalfeld – Rudolstadt – Bad Blankenburg urban conurbation to the A4, A71 and A73 motorways. At the same time the tunnel removes the bottleneck when driving through Schaala (Fig. 1). Improving the transport infrastructure saw the client, the Land of Thuringia, faced with a particular challenge. The project has to provide the capability for transporting all kinds of goods over this route, including hazardous ones, and the tunnel has to be in a position to cope with them all (Fig. 2).

In this connection special requirements were placed primarily on the tunnel ventilation: in the Pörzberg Tunnel the ventilation has to function economically whilst ensuring that should there be a fire the smoke gases are removed from the tunnel by the shortest possible path in accordance with the requirements of the RABT 2006 – Guidelines for the Development and Operation of Road Tunnels, Edition 2006 – and that the intended evacuation routes are kept free of smoke in the event of a tunnel fire.

In the RABT 2006 the ventilation is dimensioned to comply with a lorry fire. In this connection the ventilation concepts in the event of fire depend on the tunnel length. In the case of tunnels between 600 and 1,200 m in length – which includes the Pörzberg Tunnel – the RABT calls for a risk analysis. In this connection a straightforward mechanical longitudinal ventilation can suffice. However smoke removal via a large exhaust opening or smoke removal via an intermediate ceiling with an automatic exhaust system can be called for.

The solution applied in Thuringia was as follows: an 824 m long smoke removal duct was placed along the tunnel ceiling to counter fire. It is separated from the driving zone by an intermediate ceiling made of concrete. 17 remote-controlled flaps (Fig. 3) are arranged in the intermediate ceiling at roughly 50 m intervals. Should fire break out in the intermediate ceiling zone smoke is removed via 4 flaps in the ceiling duct and carried out into the open through the ventilation building and 2 vertical exhaust air shafts. Combined operation of the tunnel flaps and the jet fans enables smoke to be removed over a distance of some 200 m in the fire zone whereas the rest of the tunnel largely remains free of smoke (Fig. 4). Furthermore the tunnel is equipped with an automatic stationary fire extinguishing system making it capable for coping with hazardous goods.

The tunnel flaps, which are used in the Pörzberg Tunnel were devised by Trox and are intended for application in underground transportation facilities (Fig. 5). The flaps were tested in the International Centre for Fire Protection Technology (ICB) opened in 2009. Here the properties of construction components can be measured in a unique combined furnace for wall and ceiling trials. 20 gas-operated burners simulate fires at temperatures of up to 1,200°. In order to test flaps of the size used in tunnels the combined furnace possesses corresponding dimensions. On a 3 x 4 m surface area with a height of 4 m large dimensioned systems as well pass on values to the sensors that are installed.

Fire and smoke protection flaps for tunnels are certainly not available off-the-peg. Such structures vary significantly in their dimensions, flow behaviour as well as the installed ventilation and extinguishing technology. As a result the manufacturer of ventilation flaps plumps for developing the products on an individual basis.

During an initial conceptional phase customer requirements and valid legal stipulations are intensively examined. The first product concept is created on this basis. Following extensive conceptions and studies the development sector undertakes the design and analytical phase. Then the details of the product are further specified and a prototype built. On the basis of this prototype the thermal behaviour and stability are tested. This is followed by initial fire tests in installation mode and issues relating to corrosion behaviour and reliability are examined.

During the optimisation phase further tests are scheduled. Permanent functioning in all installation modes, deformation behaviour and tightness are investigated as well as the flow-technical behaviour and the acoustic properties. After examinations relating to vibrations and seismic resistance the optimisation phase has been concluded to such an extent that fire tests can be undertaken at the Material Test Institute. Functional tests and endurance trials are also carried out there.

A fire protection or smoke protection flap is first dispatched to the customer providing all these tests have been passed successfully. The various development phases assure that the product is custom-built to comply with the requirements of the project in question. Furthermore functionality and reliability in some cases far in excess of the required values are guaranteed. Test reports from recognised test institutes throughout Europe and the world document this.

The continuous growth of motorised traffic and the increasing need for public forms of transportation such as Metro systems, trains and buses will make it all the more necessary to go underground for creating transport arteries. In addition there is the factor that Europe as it comes together continues to develop ever faster rail links. Safe tunnels are essential for growth of this kind. The European Guideline 2004/54/EU will afford a contribution towards this. It has to be put into practice in the case of existing tunnels by 2014. The final date for tunnels, for which an extension of the deadline has been requested, is 2019. 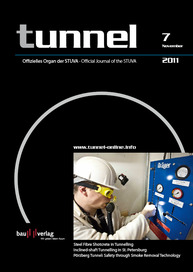 The 3.3 km long Gubris Tunnel is located in the Zurich North Bypass (A1/A4 North Ring) between the municipalities of Weiningen and Regensdorf. The road tunnel, which opened in 1985, has 2...

New Ventilation for the Belchen Tunnel

After the fires in the Mont Blanc, Tauern and Gotthard, in the interim safety regulations have been introduced to protect motorists and emergency services. For example smoke is to be removed quickly...

For generations Silvaplana has represented an important traffic hub between North Bünden and the Engadin. Transit traffic is increasingly being seen as a burden. At the end of 2007 an outline project...

After a number of tunnel fires with serious consequences around the turn of the millennium, the EU tunnel directive of 2004 and the German guidelines for the equipment and operation of road tunnels...