Part of the initial funding was used for an ideas competition initiated by the STUVA in its first year for the construction of an underground central crossing station and its external stop. As hoped, the competition awoke great public interest and interested many people for underground construction. It also suddenly made the STUVA better known in Germany and abroad.

Start of the STUVA Conferences

In order to exchange ideas with other transport researchers and also not least to make themselves better known, the STUVA has held successful annual meetings since being founded. In 1963, 150 experts already took part. The STUVA Conference held biannually since 1969 has gradually developed into the most important events of its type in the world, with more than 3800 experts attending the last conference in 2019 in Frankfurt. The event regularly has three days concerned only with tunnel construction and operation. More than 60 specialist lectures in two parallel sessions with simultaneous interpretation into English, more than 200 exhibitors from the industry presenting their services and new products at the simultaneous STUVA Expo and an international gathering of experts from tunnel construction and operation do not happen anywhere else.

Now recognised as a non-profit organisation for six decades, the STUVA can look back on remarkably positive development. As a neutral partner, the STUVA brings together all the important parties in tunnel construction, operation and for other transport facilities: at the moment, there are about 260 corporate members including many cities that build and operate underground railway, universities, associations, transport operators, consultants as well as construction companies and suppliers.

The STUVA researches, tests and advises in all areas of inner-city transport and underground construction. With the three departments “Transport & Environment”, “Tunneling & Construction” and “Fire Safety &Security”, the STUVA has a wide range of activity. One of the many recent research projects is the interdisciplinary research project “InREAKT – integrated help-reaction chains to increase the safety of public transport”, which is led by STUVA. The main idea of InREAKT is to provide improved emergency management in public transport and improve the perception of security for passengers through integrated help-reaction chains. The researchers even won the German Mobility Prize of the Federal Ministry of Transport and Digital Infrastructure and the initiative “Germany – Land of Ideas” in 2017 for the IT-supported system developed during the InREAKT project.

Since the increasing public profile of the STUVA led to ever more enquiries from private industry, the STUVA decided in 1996 to found STUVAtec GmbH as a wholly owned subsidiary for the processing of commercial commissions. This subsidiary has since developed magnificently: since its foundation, STUVAtec GmbH has provided consulting in fire protection for most new underground railway construction in Germany and also for many projects abroad. The company belongs to the exclusive pool of experts certified by the TÜV Nord for German Railways (DB AG) as a creator of fire protection concepts, and carries out calculations of both evacuations and smoke clearance.

STUVAtec is also involved in numerous research projects, for example being mainly responsible for the Transport Ministry research project “Emergency scenarios for tunnel facilities of rail-bound public transport and their management” and “Risk analysis of fire incidents in tunnels for rail-bound public transport”. For German Railways, the STUVAtec has developed the “DB design fires for urban transit and mixed passenger traffic”.

Since 2017, the STUVAtec has not only provided consultancy and specialist design services for underground fire protection but is also the right contact for preventive fire protection in building construction.

From a “one-man operation” in 1960, STUVA and STUVAtec have developed into a highly specialised knowledge group. Presently about 20 employees conduct their research in three dedicated test halls with more than 2000 m² floor area and some unique large-scale test facilities for their work in collaboration with research partners and clients with the aim of a worthwhile and accessible transport infrastructure for all. For example, STUVA has a so-called circular runway facility, in which road surfaces and installations can be tested at temperatures of between -30 °C and +60 °C. With an axle load of up to 10 tonnes and a maximum speed of 100 km/h, almost any traffic loading can be simulated.

In order to follow the aims according to their articles, the STUVA today has the best possible national and international network of partners. Already in the 1970s, the newly founded German Tunnelling Committee (DAUB) elected Günter Girnau as their first director. The offices of DAUB have since been located in the STUVA building. The STUVA was also greatly involved in the founding of the worldwide ITA (International Tunneling and Underground Space Association) and has provided two presidents in the history of this world organisation (Prof. Günter Girnau from 1980 to 1983 and Prof. Alfred Haack from 1998 to 2001).

One of the aims of the STUVA is the most widespread possible distribution of their knowledge, and to this end the international specialist journal for underground construction “tunnel” has been the official organ of the STUVA since 1982. The STUVA also publishes results from their various research areas in their own book series “Forschung + Praxis”. Issue 54 of this series, for example, “Recommendations for gasket frames in segmental tunnel linings” was published last year. This work covers the latest technical developments and combines the STUVA recommendations published in 2005 and 2006 “Testing and application of gasket frames in segmental linings“ and “Use of gaskets for sealing segmental linings” and will be an essential working reference for client organisations, manufacturers, designers and testing institutes. With its highly specialised expert knowledge, STUVA has also been involved in numerous DIN committees over the years and thanks to its neutrality is regularly appointed to arbitrate disputes.

But what use are the successes of the past if we forget about the future? TThis is why STUVA has been increasingly promoting young talent for several years now. With STUVA-YEP (STUVA Forum for Young Engineering Professionals), the STUVA has created a lively network for young engineers, which has already gained more than 300 members since its foundation in 2017. Regular events, e.g. workshops and site visits, offer the members of STUVA-YEP a platform for networking and exchange of experience on a technical but also personal level.

Together with the young engineers, the STUVA will continue to shape international tunnelling and transport infrastructure in the next decades. The fight against climate change alone makes sustainable transport essential. Our common f ture demands an intelligent transport infrastructure without wasting resources. Therefore the STUVA is working consistently to bring together the many demands on transport services; comfort, safety, accessibility, environmental acceptability and economic efficiency.

The STUVA always has its sights firmly set on the future – and will continue to use its accumulated knowledge and capabilities for transport systems oriented towards the common good. Nothing else can be expected because that is what they have been doing for 60 years now. 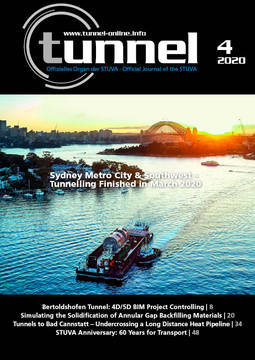 German tunnel-Forum 2013 lights up the Dark

The STUVA and the magazine tunnel published by the Bauverlag will stage the 2nd German tunnel-Forum in autumn 2013. This series of events will concentrate on light, colour and social safety and aims...

Jot down the date now in your diary: November 6, 2012 in Stuttgart or November 7, 2102 in Munich. On these days the international trade magazine tunnel together with the Research Association for...