The existing Zentralbahn route between the locations of Grafenort and Engelberg in Switzerland possesses extremely steep gradients and thus only low travelling seeds are possible. As a result a project team decided in favour of building the 4,040  m long Engelberg Tunnel, which was completed in its carcass state by 2005 with the exception of a section through Quintner Lime-stone, a pronouncedly water-bearing layer. Ingressing water delayed construction until the installation of the 50 to 70  cm concrete inner vault was embarked on in winter 2008/09.

The compressed air unit with rapid start-up acceleration swiftly penetrates the characteristic frequency range of each formwork and in this way avoids an excessively large dynamic strain on the formwork carriage. The individual compressed air vibrators are controlled centrally via a corresponding air control unit at each wall side. The vibrators are devised in such a way that these compressed air versions do not freeze up even during the cold Swiss winter.

The advantages of these almost maintenance-free compressed air vibrators are also taken advantage of for the Swiss Turtmann cut-and-cover tunnel, consisting of 2 separate tunnel tubes, each 1,350  m in length. The vibrators for the Turtmann formwork carriage are also stationary and attached directly to the sheathing via the reception plates. The compaction concept foresees that the vibrators only operate at those points where concrete is actually being placed so that the formwork is not unnecessarily affected by the vibration energy. As a result no more than 6 vibrators run simultaneously. 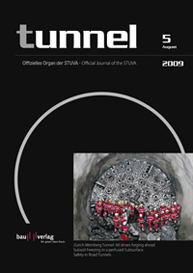 The Bjørnegård Tunnel has been under construction since early 2015 on the Norwegian E18 motorway between Sandvika and Weyen. Within the scope of linking the E16 from the northwest surrounding area...

Formwork exactly geared to the construction scheme cuts down on the construction time and minimises costs. This was no different at the Solothurn site, Bypass West in Switzerland during the production...

Peri GmbH presented new system components and manifold further developments for formwork and scaffolding technique at the 2103 bauma. The tunnel formwork carriage on display were also distinguished by...

A large number of infrastructural schemes are being executed in the region for the 2014 Winter Olympics to be held in the Black Sea resort of Sochi. These include a roughly 13??km long bypass for the...