Baku did not simply come into the news on account of the European Song Contest. It was making the headlines before that on account of the impressive economic development enjoyed by the region and Azerbaijan as a whole. More than 300 experts from home and abroad came together on September 10 and 11, 2012 in Azerbaijan’s lively capital to witness around 40 lectures and speeches during the first International Congress on “Tunnelling and Underground Infrastructure in Urban Areas”. The event was backed up by an exhibition involving more than 25 companies, which turned out to be particularly popular during the breaks.

In a welcoming address Shaig Efendiyev, the chairman of Azertunel/Metro Tikinti JSC and president of the Azerbaijan Tunneling Association, outlined the general conditions for tunnelling in Azerbaijan.

On account of the rapid increase in area and population Baku is developing into a metropolis with a modern infrastructure. Growing employment and in turn, prosperity as well as the ability to attract more and more tourists lead to a need to improve the infrastructure of the city on the Caspian Sea. The main access roads have been or are being developed and new bypass routes, roundabouts and tunnels planned and constructed. The government has introduced 2 programmes towards this end: the programme to develop the Baku Metro 2011 till 2015 and the development scheme for Baku’s Metro lines. The international conference organised by Azertunel/Metro Tikinti JSC and the Azerbaijan Tunneling Association with ITA backing represents an important milestone in this respect.

Prof. In-Mo Lee (ITA president) provided a paper at the event as well as Olivier Vion (ITA-AITES executive director), Dr. Martin Herrenknecht (chairman of the board Herrenknecht AG) or Rick Lovat (president L2 Advisors Inc.) – to mention just a few of the many well-known national and international speakers present. 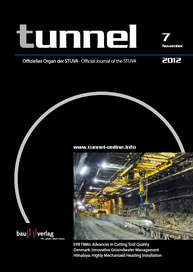 From 10th to 11th September 2012 the Azerbaijan Tunnelling Association (AzTA) invites to join the Baku International Congress Tunnelling and Underground Infrastructure in Urban Areas in...

The population of the GCC (Gulf Cooperation Council) countries is growing fast: By 2020 its population is forecast to increase by one third, to 53 million people. Accordingly, the demand for better...

More than 600 experts from Brazil and other countries are expected to participate in the 3rd Brazilian Congress on Tunnels and Underground Structures (3rd CBT) to be held in São Paulo, 20 to 22 March...

From April 2026, 2018, the World Tunnel Congress will take place at the International Convention and Exhibition Center in Dubai, UAE. The organizers, the national Society of Engineers  UAE and its...

Worldwide there is a quest for urban space driven by increasing urbanization. According to the ITACUS white paper (2010), more than half of the worlds population lives in urban areas. The challenges...