The ramps of the present-day rail routes at the Ceneri amount to up to 26 %o - the same gradients that are to be found at the Gotthard. The building of the Gotthard Base Tunnel alone would not have resulted in an extra locomotive for heavy goods trains being avoided. As far as passenger traffic is concerned the Ceneri Base Tunnel can ensure the necessary reductions in time so that a traveller can obtain optimal connections with respect to the Swiss timetable in Zurich and the Italian system in Milan. Travelling time between Zurich and Milan will be reduced to 2 h and 40 min as against the present 4 h 10 min.
Apart from these arguments there is the issue of capacities. In future these will lead to completion of routes (with the Biasca – Bellinzona line and south of Lugano to the Italian border) (Fig. 1).
Overview of the Ceneri Base Tunnel Project
The Ceneri tunnel system foresees 2 single-track rail tubes each 15.4 km in length from Camorino near Bellinzona to Vezia in the vicinity of Lugano. The centre distance between the tunnels is roughly 40 m. Every 325 m the rail tubes are linked by cross-passages. The tunnel itself will largely be excavated from the intermediate point of attack at Sigirino. The Sigirino access tunnel was produced here in 2008, a heading some 2.3 km in length with 9.70 m diameter. A system of chambers is currently being built at the junction of the access tunnel and the tunnel axis. The excavation of the 2 tunnel tubes is due to commence from this system in 2010. The chambers will accommodate a part of the construction site facilities as the amount of room in front of the access tunnel’s portal is very constricted. The concrete plant will be housed in the biggest chamber.
The 8 km from Sigirino towards the north will be excavated by means of drill+blast. Towards the south the drive will be accomplished via blasting for almost 2 km, the next 4 km will be tackled by drill+blast or by a tunnel boring machine: Contractors bidding for the main contract section had the opportunity to offer the one or other method. Submissions are currently being assessed. A contract to execute the work is likely to be awarded in summer 2009 with the start of construction scheduled for 2010.
The main construction site is set up in Sigirino with the material management facilities, the water treatment plant, a works siding, the final disposal site for the excavated material (roughly 7 mill. t) and an optimal road link (motorway and cantonal road). Furthermore there is a site village with accommodation for 450 persons, a canteen, the site management and company offices as well as an Info Point, which caters for persons visiting the external site and the tunnelling site itself (Fig. 2).
The 2 portal construction sites in Camorino and Vezia may be smaller than the main point of attack at Sigirino but are highly sophisticated in technical terms.
The north portal in Camorino is located beneath the A2 motorway, which will be undercut in a soft ground section (fill from the motorway) with only about 10 m overburden.  The drive will take place here using twin-arch horizontal jetting columns. Immediately after the soft ground section there is a rock section some 700 m in length. In order to adhere to the deadlines for the overall construction programme and to compensate for any delays on the main contract section coming from the south, the works contract caters for an option of a max. 2 km.
In the Camorino portal zone the sophisticated 2.7 km open line from Giubiasco Station to the north portal of the Ceneri Base Tunnel is also being produced. This section includes 2 long viaducts, a 4-track bridge above the motorway and developing the existing railway line from 2 to 4 tracks over an embankment (Fig. 3). At the south portal in Vezia the new line directly joins up with the existing SBB railway line. The construction site is located exactly below the Villa Negroni, a protected historic building. Driving operations in this area are undoubtedly tricky. A 170 m long cut-and-cover tunnel is to be constructed. Furthermore a counter-drive some 30 m long will be excavated given shallow overburden. The rail tunnel intersects the Vedeggio-Cassarate road tunnel, which is also being built, at this point (Fig. 4). 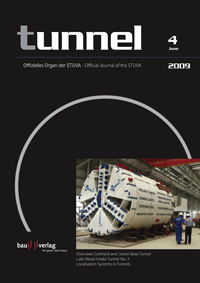 Focus on the Gotthard Axis

Tunnel beneath the Bosporus Strait to safeguard Istanbul‘s Water Supply

Designed for a small Cross-Section

Ceneri Base Tunnel  Installation of Railway Equipment has begun

At the north portal of the Ceneri Base Tunnel, installation of railway equipment in the east bore started in summer 2017. The 15.4 km long base tunnel between Camorino and Vezia will be equipped in...

The CEO of the AlpTransit Gotthard AG Renzo Simoni reported on progress achieved in building Switzerlands biggest construction project during the premiere of the 2009 AlpTransit annual film on March...