On July 10th 2015, the European Parliament confirmed the European Commission‘s 13 billion euros CEF (Connecting Europe Facility) infrastructure investment plan. 1.18 billion euros of these funds are earmarked for the Brenner Base Tunnel, which is thereby the most heavily funded infrastructure project in Europe. 50 % of the cost for the exploratory tunnel (about 303 million euros) and 40 % of the costs for both main tunnels (just under 880 million euros) will be borne by the EU in the period from 2015 to 2020.

More than 700 different projects, for a total volume of about 36 billion euros, competed for EU financing. The projects chosen for funding were those that are most useful for Europe as a whole. The relevant award criteria were: relevance, project maturity, impact and quality.

The European Union motivated the funding decision noting that the Brenner Base Tunnel, along with the Fehmarn Belt Tunnel (Denmark–Germany), is the most important north-south link and that these projects will guarantee new capacity for freight transport and increased speeds for passenger trains. 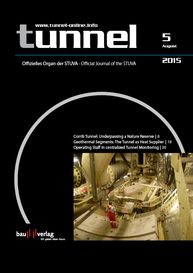 BBT: Start of Works on the main Tunnel

The work on the Brenner Base Tunnel, the 64 km long heart of the new Brenner rail line between Munich and Verona, is progressing apace. On March 19, 2015, work began on the main tunnel in Austria....

The 55 km long Brenner Base Tunnel (BBT) represents the core of the new Munich-Verona route on the trans-European network (TEN) and is due to open in 2025. It is estimated to cost 8.2?b. euros of...

Phase III, the main construction phase of the Brenner Base Tunnel (BBT), currently the European Unions /EUs) most important transport infrastructural project, was started on April 18, 2011 in...