Construction work on the Albvorland Tunnel, which will be 8176 m long, officially began on 6 October 2017. Implenia has been commissioned by Deutsche Bahn to build the tunnel, a key section of the new 60 km long railway line between Stuttgart and Ulm. The first of the two EPB TBMs by Herrenknecht, known as Wanda, will carve its way through the rocks beneath the Albvorland region between the towns of Kirchheim unter Teck and Wendlingen. The second machine, called Sibylle, will start a little later; work on the two tunnels will progress in parallel for approximately 18 months.

The ceremony to mark the official start of construction of the railway project’s last major tunnel was attended by, among others, Ronald Pofalla, Member of Deutsche Bahn’s Management Board responsible for Infrastructure, Guido Wolf, Europe Minister for Baden-Württemberg, Norbert Barthle, Parliamentary State Secretary at the Federal Ministry of Transport, and Anton Affentranger, CEO of Implenia. Tunnel “Godmother” Nicole Hoffmeister-Kraut, Minister of Economic Affairs for Baden-Württemberg, was also there to see work begin on the tunnel that has been named “Nicole” after her, during the construction stage.

More than 60 % of the tunnel excavation works (38 km of altogether 61 km) on the new Wendlingen–Ulm rail line have been completed by now. 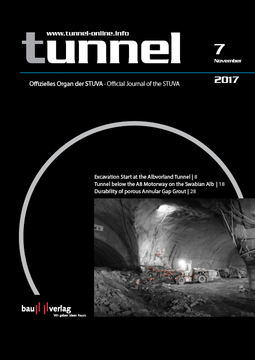 Implenia has been commissioned by Deutsche Bahn to build the 8-km Albvorland Tunnel, a key section of the new railway line between Stuttgart and Ulm. The breakthrough of October 29 in the southern...

The first tunnel boring machine (TBM) Sibylle completed its work in early August 2019. It had been used for driving the Albvorland Tunnel between Kirchheim unter Teck and Wendlingen am Neckar. In...

In contrast to Wanda, the second tunnel boring machine, which is excavating the Albvorland Tunnels south bore, Sibylle did not build the complete tunnel to the portal in Wendlingen am Neckar....