In both Germany and Switzerland, the construction of large-scale projects often causes a stir in the public and the media. It is repeatedly discussed whether the realisation of large-scale projects is more successful in Switzerland than in Germany. Media coverage in both Germany and Switzerland gives the impression that Switzerland plays a certain pioneering role and serves as a role model in the realisation of major projects, while major projects in Germany often fail. For example, the Handelsblatt has the headline: „Why are the Swiss so much better at large-scale projects?“ [1]. This impression is further reinforced by a study by Hammerschmid et al [2], which shows that Switzerland is the European leader in project management of large infrastructure projects, while Germany occupies a mid-table position. In the media coverage, the major projects Berlin Brandenburg Airport, the Elbe Philharmonic Hall in Hamburg and Stuttgart 21 are listed as negative examples for Germany. These major projects repeatedly make the headlines with massive cost and schedule overruns. On the Swiss side, the Gotthard Base Tunnel is often used for comparison, as it is the longest railway tunnel in the world and was completed within the plannedcost and time frame.

However, the success of a country in the realisation of major projects cannot only be determined on the basis of a few selected examples. For example, there are also major projects in Switzerland that can be considered negative examples due to significant cost and schedule overruns. Conversely, there are major projects in Germany that have been successfully realised but have received little attention.

Guarantee of the stipulated functionality

Time duration/restriction of the renewal measures

Guarantee of the stipulated structural substance

Involvement of the public during the construction period

A 7-point Likert scale is chosen for the scaling of the measurement system (Fig. 1), which enables the consideration of quantitative and qualitative success criteria in equal measure. The target values of the individual success criteria are based on the fulfilment of the project requirements, so that the fulfilment or the relative deviation from the defined project requirements is evaluated. The scale scores range from +3 to -3, with +3 corresponding to over-fulfilment of the project requirements and +2 to achievement of the target value. The measurement system developed should thus make it possible to fully assess the project success of large underground construction projects. A detailed description of the success criteria and their sub-criteria can be found in [3].

3 Selection and Justification of Samples

In order to compare the project success of large underground construction projects in Germany and Switzerland, a project portfolio of large underground construction projects was compiled for both countries according to previously defined selection criteria. The entire project portfolio includes road and rail tunnels in Germany and Switzerland. The tunnels considered have a minimum length of 1.5 km, cumulatively over all tubes. Only new constructions with an investment volume of at least 100 million euros are examined. The construction of a new tube of an existing tunnel is considered as new construction. In addition, only tunnels that were commissioned in the period between 1980 and 2021 or that could have been expected to be commissioned are taken into account.

Based on the literature and the data freely available on the internet, 65 tunnels in Germany and 70 tunnels in Switzerland could be clearly assigned to the criteria. The projects for the respective samples for Germany and for Switzerland were selected from the project portfolio. Since only a limited amount of the data needed to classify the projects in the measurement system was freely available, most of the data was obtained through interviews with project participants using a questionnaire. The sample was therefore largely determined by the willingness of the project participants to be interviewed. The data from the 29 interviews conducted were supplemented by a literature and internet search as well as by raw data from another paper.

A total of 70 underground construction projects were considered and evaluated in this work [3]. This sample is composed of 45 Swiss and 25 German projects. The different sample sizes of the two countries result from a better data availability in Switzerland.

The 70 underground construction projects considered were sorted into the measurement system and evaluated on the basis of the data obtained. For a better overall view, the individual success criteria were considered within the framework of [3] using mean values of the samples or sub-samples as a comparative measure. Individual projects were not examined in detail. The resulting mean project success for each success criterion is used to compare the German and Swiss samples. In order to enable a uniform basis for comparison, only underground construction projects with commissioning from 1999 onwards are taken into account for the overall comparison of the two countries, as it was not possible to obtain sufficient data for Germany on projects with commissioning before 1999 and Switzerland sometimes shows greater differences in the success criteria between the older and the newer tunnels (see also Fig. 4).

5 Comparison of Results Between
Germany and Switzerland

The overall comparison of the results determined for the project success of tunnelling projects in Germany and Switzerland shows that the German projects perform better, especially with regard to the success criterion “occupational safety” (Fig. 2). The difference in the mean target fulfilment levels of 1.2 is indeed significant and the largest for all success criteria. The comparison of the criteria “cost” and “schedule” shows that compliance with the planned costs and schedules works better in Switzerland. This can be explained primarily by the fact that in Germany it is often not possible to take provisions for risks and contingencies into account in the financial budget. However, since no underground construction is risk-free, systematic risk management is of great importance and an estimation of costs for the occurrence of potential risks in the financial budget is mandatory [5]. The mean target fulfilment levels for these two success criteria are 0.5 higher for the Swiss projects than for the German projects.

2 | Comparison of the project success in Germany and Switzerland
Credit/Quelle: Escherich

2 | Comparison of the project success in Germany and Switzerland
Credit/Quelle: Escherich

In summary, it can be stated that with regard to the success criteria “cost”, “schedule” and “occupational safety” there are greater differences between the countries of Germany and Switzerland. On the other hand, both countries are similarly successful with regard to “quality”, “organisation and processes”, “environment” and “public opinion”.

From the comparison it can be deduced that in Switzerland there is a need to catch up with regard to occupational safety. This lack of progress has already been recognised in Switzerland and measures are being taken to improve occupational safety in Swiss underground construction projects. The results of this work show that these measures should be continued and intensified. For German underground construction projects, the comparison reveals a need for action with regard to the success criteria “cost” and “deadlines”. Here, for Germany, a consideration of risk costs including a provision for unknowns in the budget is necessary for an improvement of the status quo. In addition, project success can be increased if the recommendations for action of the reform commission “Construction of Major Projects” [5] are also consistently implemented in the realisation of major projects, as the samples of both countries show a strong influence of the partnership approach. This becomes evident by dividing the samples into projects with cooperative as well as confrontational cooperation (Fig. 3).

3 | Comparison of the achievement of objectives as a function of the manner of project cooperation
Credit/Quelle: Escherich

3 | Comparison of the achievement of objectives as a function of the manner of project cooperation
Credit/Quelle: Escherich

6 Assessment of the Significance
of the Results

For a comprehensive assessment of the results of the direct comparison between Germany and Switzerland, they were analysed and discussed with regard to their significance and possible trends. For this purpose, a sensitivity analysis, a variance analysis and a correlation analysis were carried out.

The sensitivity analysis was undertaken to determine how sensitively the evaluation of the success criteria reacts to the variation of the data input. For this purpose, it was assumed that 10 % of the underground construction projects in both samples were classified as 1 too positive or too negative with regard to the target fulfilment level of all success criteria. The sensitivity analysis shows that statements about general differences between Germany and Switzerland with regard to the success criteria “quality”, “organisation and processes”, “environment” and “public opinion” should be refrained from on the basis of the results of this work, since the small differences can also result from the subjectivity of the interview partners and a varying data basis. For these success criteria, both countries perform similarly well and no statement can be made as to whether one country is better. For the success criteria “cost”, “schedule” and “occupational safety”, however, a statement about differences between Germany and Switzerland is possible.

In a subsequent step, a univariate analysis of variance (ANOVA) was used to examine whether the differences between the two countries on the individual success criteria (referred to below as the “influence of the country”) are statistically significant. Furthermore, a multivariate analysis of variance (MANOVA) is used to analyse whether the country has a significant influence on the project success as a whole. In addition to the influence of the country (Germany/Switzerland), the influence of the tunnel type (road/rail tunnel) and the partnership approach (cooperative/confrontational cooperation) on the project success is also examined. The partnership approach in particular is an important success factor for large infrastructure projects.

The MANOVA confirms the findings that the partnership approach has a major influence on project success and that cooperative collaboration should be strived for. In contrast, the influence of the country and the type of tunnel on the success of the project as a whole is assessed as low on the basis of the MANOVA.

In a final step, a correlation analysis was used to examine whether there is a connection between the success criteria and the time of commissioning of the underground construction projects. For both the success criteria “environment” and “quality”, there is a strong positive correlation with the time of commissioning. This result underlines an increasing awareness especially for the environment in the course of the last years. Another reason for the increased project success in terms of quality and environment could be a tightening of regulations and requirements as well as an advance in the state of technology, for example with regard to materials and machinery.

In summary, it can be said that large underground construction projects in Switzerland are not fundamentally more successful than in Germany when all success criteria are equally considered. Although it can be seen that Swiss underground construction projects are more successful on average in meeting cost and deadline targets, Germany has higher target values on average with regard to occupational safety. The further investigations show the great influence of cooperation on project success, so that cooperative collaboration proves advantageous for projects in both countries in any event. 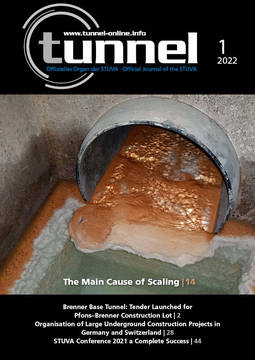 Sebastian Kube received the prize for his contribution Electrical Resistivity Measurements to Describe Particle Incorporation during Penetration of Bentonite into Cohesionless Soil. Sophie...

Lucerne Station is numbered among Switzerlands 5 largest with more than 60,000 passengers per day. This transport hub with 22 trains/hour and direction is already stretched to its limits. The Swiss...

Swiss Tunnel Congress 2022 in Lucerne: A Success With 850 Participants

Colloquium, congress, exhibition, evening events and excursions  the event concept could finally be implemented again as it was intended: as one of the most important platforms for the entire...

The construction of underground infrastructure projects is a complex and lengthy matter. Conflicts between the contracting parties often arise during the planning and especially during the execution...