The Tunnel de Court is the last tunnel in the Swiss infrastructure project „A16 Transjurane“, which includes the building of 85 km of the autobahn A16 between Biel and Boncourt on the French border in the northwest of Switzerland. The planned traffic route A16 crosses the cantons of Bern and Jura and will link the French motorway network to the Swiss national road network when completed. The autobahn is narrowed in the tunnels to one carriageway with one lane in each direction. Completion of the Transjurane is planned for the end of 2016; 84 % of the route is already in operation today. The total cost of the project is 6.54 billion Swiss francs. The tunnel is being constructed by the Association Tunnel de Court under the technical and commercial lead of Marti Tunnelbau AG, and the construction cost of the tunnel amounts to 70 million Swiss francs.

The 705 m long, single-bore Tunnel de Court will bypass the town of Court at a good distance, running along the ridge of a slope in a curve with a gradient of about 3 %. The breakthrough of the tunnel took place in January 2015. Due to the very heterogeneous ground conditions with layers of soil and rock (freshwater Molasse) with numerous displacements and fault zones, the tunnel consists of

a 650 m long mined section, which was driven under the protection of a pipe canopy. Collapses at the face had to be dealt with, and the failure of the top heading foot abutment also had to be considered.

The single-bore tunnel with two lanes has an almost circular cross-section in order to counter the swelling pressure of the ground; the cross-sectional area is about 120 m². The tunnel is provided with a poured concrete inner lining with a thickness of 30 cm, which is unreinforced except for the portal areas and zones with geologically unfavourable ground conditions, with umbrella waterproofing above it. The groundwater from the drainage mats is collected in drains on each side running to the east portal. Under the carriageway is a service channel, which also serves as an escape tunnel and is provided with escape stairs in the middle of the tunnel. The escape route is positively pressurized to prevent the entry of gases in case of an incident.⇥G. B. 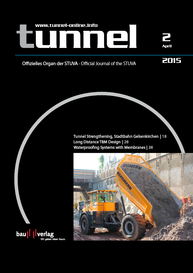 The Transjurane is one of the most challenging road projects in Switzerland. With a length of 84 km, the new national autobahn A16 crosses the Jura mountains, running through numerous smaller and...

The Swiss Federal Supreme Court has upheld two appeals against decisions of the Swiss Federal Administrative Court of March 2014 in connection with the award of railway infrastructure systems for the...

The Weissenstein Tunnel, 3700 m long and located on the route between Solothurn and Moutier in Switzerland, is in a poor state. At least thats the conclusion reached by a survey undertaken in 2011...