Owing to increased requirements posed on operating technology and safety in traffic tunnels (RABT 2006 and Direc-tive 2004/54/EC) an ever greater number of installation systems must be taken into consideration in conjunction with the inner lining.
Halfen anchor rails have been established as a fixing system for the inner lining of traffic tunnels driven by the NATM for many years throughout the world. These are mounted on the formwork base for the carriage prior to the concreting operations for the inner shell and then concreted in place. Com-parable possibilities for use are also non-problematic for mechanically driven traffic tunnels with a reinforced concrete lining.

The Finne Tunnel on the Erfurt-Leipzig/Halle new Line
The Deutsche Bahn AG’s new Erfurt-Leipzig/Halle route is part of the Berlin-Munich high-speed link and an element of the trans-European networks. It has been designed for speeds of up to 300  km/h. At the end of 2006 the Finne Tunnel near Herrengosserstedt, as a part-project for the new route, was awarded to a joint venture comprising Wayss & Freytag Inge-nieurbau AG, Max Bögl Bauunternehmung GmbH & Co. KG and Porr Tunnelbau GmbH.
At the beginning of 2008 work started on producing the 48,000 segments on the spot in a field factory by the Mobil Baustoffe GmbH. Rings with left-hand and right-hand conicity are produced. The corresponding formwork sets are supplied by the Herrenknecht Formwork Technology GmbH.
In April 2008 the mechanised driving operations for the 2 single-track tubes each with 9.60  m diameter commenced at the Finne Tunnel. Each tube is roughly 6,886  m in length making the tunnel the longest along the route. It is intended to complete the Finne Tunnel in its carcass state in 2011; installation of the catenary line, the electro-technics as well as the guidance and safety technology will start along the entire route. These systems have to be assembled safely and economically.
Fixing Operating Systems
The most important elements to be fixed during the construction of a railway in a tunnel are those for the assembly, the line feeder and the return line. In excess of 4,000  m of pairs of anchor rails Type HTA 52/34 in stainless steel are also installed in keeping with the DB Netz AG’s guideline drawing for the mechanically driven Finne Tunnel. Varying individual lengths ranging from 1,100 to 4.300  mm with a bending radius of 4,800  mm are supplied. The anchor rails are delivered to the production plant on the construction site ready to be concreted in place in the form of pairs with spacers and short-circuit proof connection with anchors welded on at the side flush with the concrete (Fig. 1).
In order to provide protection against fresh concrete penetrating the anchor rails are provided with a combined filling, which subsequently facilitates the segments to be handled without difficulty with the aid of a vacuum lifter and a vacuum erector when they are being placed. Once they have been installed the filling can be removed so that the anchor rails are ready to bear a load in conjunction with hook bolts.
Inclusion in Producing the Segments
During the production of the segments the pairs of anchor rails are laid in the segment formwork and assembled on the formwork base by means of a fixing system geared to the type of rail (Fig. 2). As a consequence installation tolerances that are called for such as parallelism can be adhered to. Once the anchor rails are fixed the reinforcement cage is installed and the segment concreted. When the segment is stripped the rail locking mechanism is released together with the segment formwork.  If special segments equipped with anchor rails are used every 22nd ring has to be provided with rails in the given example in order to adhere to the assembly gaps for the catenary system (Fig. 3). Any influence on the steerability of the tunnel boring machine is thus negligibly small for the above-mentioned reasons combined with left-hand and right-hand conic rings.

Advantages of Anchor Rails When concreted anchor rails are applied there is no need for a fixing system to be subsequently assembled in the tunnel. Only the operating system itself has to be fixed in place. When operating systems are assembled damage to the concrete or the reinforcement as well as noise and dust are avoided completely as no drilling work is required for their installation. As a result there is no necessity either for an additional system or guarantee.
The fact that there is no need for drilling also leads to less construction time and expenditure. Furthermore concreted anchor rails can be employed for the temporary assembly of supply and transport lines, walkways or working platforms while the tunnel is being driven.
 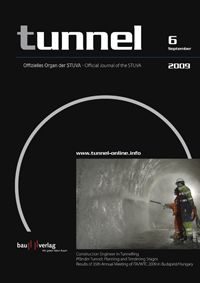 The New Schlüchtern Tunnel is nearly 4 k m long and possesses 9 m internal diameter. It was driven using a tunnel boring machine (TBM) at a distance of 50 to 90 m from the existing tunnel [1-4]. As...

On the construction of the Albabstieg Tunnel, the consortium of companies Ed. Züblin and Max Bögl working for client DB Projekt StuttgartUlm GmbH have now completed concreting of the last of 945...

The 500 km long new/upgraded Nuremberg-Berlin rail route, also known as German Unity Transport Project No. 8 (VDE 8), was approved by the German Parliament in 1991 in the form of a high-speed line (up...