EPB and Slurry TBMs, first developed in the 1960s and refined in the decades following, were designed around very different philosophies. Though both prototypes originated in Japan, EPBs were founded around the concepts of achieving balance with the surrounding earth pressure. A screw conveyor and pressure bulkhead allowed the ground to be removed and equilibrated to atmospheric pressure, with the balance being achieved through machine advance and rate of screw rotation. Slurry TBMs were designed as an enclosed system, maintaining pressure through the formation of a slurry and muck screen, with the muck and Bentonite mixture being removed and cycled through a system of slurry pipes.

Determining when each machine is best used is not always clear, however. “If everything were to go perfectly on a given soft ground job, a Slurry TBM design would offer greater control. However, if there is an error in operation, or if there is a void at the face or another problem resulting in loss of the mud screen, anything outside can enter the machine,” said Shinichi Konda, Robbins Chief EPB Engineer. Herrenknecht.com lists EPBs as being “in their element when the geology is soft. Cohesive and non-cohesive soils with a high clay or silt content and low water permeability are ideal conditions.” Slurry TBMs are discussed as beneficial “in non-cohesive soil conditions ranging from fine-grained sand to coarse-grained gravel.”

While all of these statements may be true, the reality is that both machine types have undergone numerous design improvements in recent years, which allow them to excavate in ever more overlapping ground conditions. These commonalities make each method viable in a variety of ground types, though some important differences between the two setups remain.

Choosing between EPB and Slurry machines is most often a choice depending on ground conditions. “In granular material, slurry is the best choice. Slurry TBMs can react quicker because the support of the face is controlled by pump pressure. When using EPBs in mixed face conditions, some of the forward thrust for advance can be lost when harder material is encountered, but this can be overcome with longer and multiple screw conveyors. In cohesive materials EPB is better, because the slurry machine has a tendency to become plugged. In non-cohesive materials (e.g. sands and gravels), Slurry is better. Conversely, Slurry machines in clay material can present a problem,” said Paul Zick, Underground and Tunnelling Operations Manager for contractor Obayashi USA.

In abrasive conditions, both types of machines are capable of efficient excavation. New grades of protective armor cladding are available for use on cutterheads, offering over five times the wear life of traditional wear plates. With the proper periphery tooling around the cutterhead rim, both types of machines can excavate abrasive ground. Wear detection devices on both machine types can also determine the depth of wear in cutting tools, and offer advance warning for tool replacement.

In mixed ground, both EPBs and Slurry machines can be fitted with a combination of disc cutters and carbide cutting tools. Ribbon-type screws can be used in EPBs, which allow boulders and large cobbles to travel up the screw for removal through a boulder collecting gate. Slurry machines typically use a crusher to allow chips of harder material to travel through slurry pipes.

Konda cautions that both EPBs and Slurry TBMs have difficulties when used in purely hard rock conditions where water pressure is expected: “Excavating only rock with an EPB can result in high abrasion wear and loss. This is because an EPB in rock is operated in a non-pressurized mode, so there is no pressure differential and the muck must be pulled out of the screw conveyor, or a belt conveyor must be installed.” Regarding the limits of the Slurry machine, he emphasizes that although the action of Bentonite slurry at the face results in less abrasion loss at the cutterhead, other areas of the machine are subject to extremely high wear. These include the slurry discharge pipe, which carries the chips of rock, and the rock crusher.

Traditionally, Slurry TBMs have been recommended for any water pressure over 2 bar, though the high pressure limit for use of EPBs is continually being raised. Notable exceptions to the 2 bar limit include three 8.93 m diameter Robbins EPBs at Mexico City’s Emisor Oriente Wastewater Tunnel. The machines have been designed for water pressures up to 6 bar, with two-stage screw conveyors and patented, pressure-compensated disc cutters.

The pressure-compensated cutter design takes into account a 3 bar pressure differential between the inside of the cutter and the outside, due to the seals. A device transmits the external pressure to the inside of the cutter, which is filled with oil, making the differential across the seals zero. This setup allows EPB machines to excavate in high pressures of 7 bar or more, and prevents the failure of cutter bearings in these conditions.

Both types of machines can excavate at good advance rates, but there are some limitations to their speed. When designing an EPB machine for fast advance, higher power and higher torque are necessary. Two Robbins EPBs being supplied for Chengdu China’s Metro Line 2 Extension have been designed in this way. High-powered, modular cutterhead drive systems have been paired with specially designed screw conveyors capable of operating at 230 kNm of torque. The design offers faster muck removal, as well as abrasion protection.

When designing a slurry machine for fast advance, the slurry separation plant must be proportionately larger to handle the increased flow rate, taking up a larger footprint at the surface.

Given the wide variety of variables to be considered with soft ground TBM selection, Robbins opted to conduct a survey to gather industry opinions. Conducted in June 2011, the survey resulted in responses from 88 people in the design, consulting, contracting, and project ownership segments of the industry. Participants were asked the following question:

Do you think there is a preference in the industry for EPB or Slurry TBMs on soft ground tunneling projects?

As can be seen in the pie chart, more than 58 % selected ‘It depends’ (choice c). Of those that definitively chose a machine type, 33 respondents chose EPB, compared with 4 for Slurry TBMs. A wide variety of opinions were given for selecting choice c, but some commonalities included: water pressure, soil particle size, and perception of risk by the consultant and contractor.

Several respondents listed ground condition as the main deciding factor: “Ground type always determines the appropriate TBM as well as cost factors,” said one respondent. Another was also concerned about the material produced during Slurry operation: “It is a given that conditions will dictate TBM design, but it is always easier to work after the fact with EPB material rather than Slurry material.”

Perception of risk was another interesting factor that came out of the comments section: One respondent wrote, “Slurry is sometimes used as a one-size-fits-all solution where possibly it is not really needed. It can sometimes be an emotional choice rather than a 100 % technical decision - there is less perceived risk with Slurry compared to EPB, especially in settlement-sensitive locations.” Another gave a similar response: “Consultants are promoting certain systems where they may not be necessary, but because they are in fashion and are perceived to lower risk.”

To further refine these points, participants were asked a second question: If given the choice, what are the main factors that impact your decision in choosing a Slurry or EPB TBM? The top two factors should be selected.

The vast majority, 87.8 % of respondents, listed ground conditions as the deciding factor in using a Slurry or EPB TBM. The two choices following ground conditions were cost (46.3 %) and Experience on Previous Jobs (39 %). One person specified the following: “In Japan, more than 20 years ago this kind of question was discussed many, many times. It depends on all the factors mentioned above, but now, EPBs can solve almost all tunnel conditions.”

Based on the survey results, more people believe there is a preference for EPB over Slurry machines in the industry, though the choice between the two weighs heavily on varying conditions. These variables include geology, cost, experience, and perception of risk. Several respondents noted that the perception of risk is lower for Slurry machines in variable ground, because the entire system is automated. However, the comments seemed to imply that the risks are in fact equal between the machine types. EPBs were also mentioned as being vastly improved in recent years and able to excavate effectively in most conditions. As one respondent put it, “All cases are different, and deserve tailor-made solutions.”

The Right Choice may be based on Experience

Using an EPB or Slurry TBM is based on many variables - at high pressures above 6 bar a slurry machine is best used, while in cohesive materials an EPB is the clear choice. In conditions where either machine can be used, however, the best choice may depend on contractor experience.

EPBs are better at handling voids that occur at the tunnel face, because the cutterhead mixing chamber is filled with non-compressible material. In general, they are seen as being more adaptable in a variety of ground conditions. EPBs often have a lower initial cost than Slurry machines as well, particularly for contractors who do not own all of the equipment needed for Slurry TBMs, such as a separation plant.

Konda emphasized that although Slurry systems are automated, their efficacy is based on the contractor’s prior knowledge: “If a Slurry TBM is used, the contractor must be familiar with how the machine and the slurry itself react to a given geology. The flow and density of muck in the system can be easily measured, but the proper parameters for the system must be predetermined manually. This knowledge only comes with prior experience.” 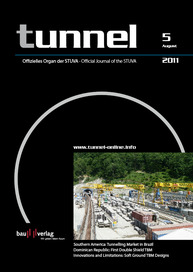 In Malaysia, tunnelling took on an important change in 2003 when there was an acute need to address major flooding issues in the city of Kuala Lumpur. With the city densely built up to the brims, the...

In a mixed and unpredictable underground environment the increasing use of hybrid TBMs is one that goes with the territory. Where multiple machine types might have once been used for different...