Tunnellers caught up with each other at the 2011 STUVA Conference.

Established for many years as the “tunnellers’ get-together” and held in high esteem in expert circles the STUVA Conference held at the Berlin Fairgrounds from December 6 till 8, 2011, which attracted more than 1,400 participants, was a great success.

After 1981 and 1997 this was the third time the STUVA Conference was held in Berlin – a city with a long tunnelling tradition although situated in flat terrain. With an eye to the future work on a metro system started here at the end of the 19th century, mainly using cut-and-cover at the time. Tunnelling reached its peak as numerous schemes were undertaken in conjunction with the German Unity Transport Projects and the development of the road and rail networks for the new capital. Many of these projects are at least partly underground – something which enabled the city to be developed in the first place. It was recognised at an early stage that problems resulting from the ever growing volume of traffic could only be tackled by running transport arteries below the surface thus complying with environmental requirements. Dr. Kunst from Berlin’s Senate Administration touched on the development of transportation in Berlin in the opening paper taking the elimination of dead-end stations into account.

In his opening address the STUVA board chairman, Prof. Martin Ziegler, dealt with the need to develop the infrastructure in order to also ensure a prosperous society in future. This must be accomplished in a sustainable and environmentally-friendly fashion in order to maintain a balance. The Conference’s motto was thus “Underground Construction for Sustainable Environmental and Climate Protection”.

Ziegler pointed out that increasingly major projects are difficult to accomplish nowadays given strong resistance from sections of the public. He advocated that the need for underground links must be brought home to the population. A step in this direction was provided in the keynote speech, dealing with the issue whether people were onlookers, opponents or participants when it came to improving the acceptance of major projects by the general public (Fig. 1).

The resultant series of lectures dealt with the wide spectrum of underground construction:

This series was rounded off by a section devoted to underground construction in the Berlin area.

The excursions on Day 3 completed the event and afforded extremely varied impressions of individual elements of Berlin’s infrastructure. Participants were able to get to know “Berlin from below” during what is the most unusual city tour of Berlin: a voyage of discovery in an open metro car through the urban metro tunnels. During a discussion forum experts responded to participants’ questions relating to the scheduled “U5” construction scheme. The redevelopment of the “Ostkreuz” as the most important transport hub in Berlin commuter transportation was presented and the fire service drill facility belonging to the BVG enabled a demonstration approximating real conditions to take place. Geared to those taking part at the STUVA Conference a city tour together with a well-qualified expert displayed transport structures, which were built before and after 1990 in conjunction with the redevelopment of downtown Berlin. The underground link to the rail network was the main topic tackled during the excursion to Berlin Brandenburg International Airport and the production of modern rail vehicles presented at Bombardier’s biggest engineering and manufacturing plant in Germany.

A new record was established at the 2-day exhibition accompanying the Conference: this time around more than 2,000 net m² was taken by 130 firms from home and abroad to present products and services from the fields of contracting, sub-contracting, planning and consultation. The entire exhibition area was sold out weeks in advance (Fig. 2).

On the occasion of the STUVA Conference the Research Association for Underground Transportation Facilities Inc. – STUVA – awards the STUVA Prize on a 2-yearly basis for outstanding achievements and innovations in the field of underground construction in order to promote the concept of the use of underground space among experts and the general public.

In 2011 the STUVA Prize went to the “Citybanan” project in Stockholm. The Citybanan represents a 6 km long twin-track S-Bahn tunnel in the centre of Stockholm establishing a link between Tomteboda on Stockholm’s northern fringe and the suburb of Södermalm located in the south.

With this award the STUVA acknowledges Stockholm’s future-oriented use of underground space for inner-urban transportation and the orientation of the urban infrastructure towards underground measures. As a result surface routes for commuter transportation and private motoring can be kept to a minimum and the city panorama improved as a consequence.

These efforts harmonise with STUVA’S aims and with this those of the 2011 Conference. The motto – Underground Construction for Sustainable Environmental and Climate Protection – finds fulfilment here. The purposefully executed development of the underground transport network signifies that the available resources are sustained in the long term both with respect to the available space as well as to mastering the need for mobility in this built-up area in a way devised to save energy. Thus living space is provided on the surface.

Furthermore innovative production methods are applied during this project, which call for outstanding engineering achievements. The tunnel between Södermann and Riddarholmen is representative. It cannot be set directly on the ocean bed on account of the soft subsurface. Instead the 3-section immersed tunnel was conceived as an underwater bridge and supported on 4 pillars.

Consequently the development of Stockholm’s transportation infrastructure can be regarded as a model for other European and international cities (Fig. 3).

Dipl.-Ing. Anna-Lena Wiese, Chair for Tunnelling, Pipeline Construction and Construction Management, Ruhr University Bochum won the prize in the “Young Forum” competition for her contribution “Comparative Investigations of Stress Controllers for Application in Squeezing Rock”. The final choice took place as a result of an evaluation by the audience attending the series of lectures with the content, nature of pictorial presentation and the manner of delivery all being assessed. Anna-Lena Wiese was able to impress on all these sectors.

The prize consists of a trip to China to visit outstanding tunnelling sites as well as to a plant producing tunnelling machines. We should like to congratulate Anna-Lena Wiese on her success and trust the trip will be a knowledge-enriching as well as an exciting experience (Fig. 4).

The Proceedings – Volume 44 in the STUVA book series “Research + Practice, Underground Transportation and Underground Construction” – with the long versions of all lectures (each in their original language as presented - German or English with summaries in the other language) were published to mark the Conference and were issued to all participants. Further copies are available via the book trade or directly from the publisher (Bauverlag BV GmbH, Profil – die Versandbuchhandlung, Avenwedder Str. 55, 33311 Gütersloh; 316 pp., 365 Ills. and Tables mostly in colour, Format DIN A4, limpbound, ISBN 978-3-7625-3646-8, Price 50. - euros – Fig. 5).

On the occasion of the 2011 STUVA Conference the scheduled STUVA Inc. General Assembly took place on December 5, 2011.

The period of office of the following board members, elected for a scheduler 4-year term, expired accordingly at the 2011 General Assembly:

The above mentioned gentlemen were re-elected to their posts for a further period in office.

As a result the STUVA Board is composed as follows:

The 2011 General Assembly saw the following gentlemen step down from the STUVA Advisory Board:

The following joined the Advisory Board:

At the 2011 STUVA Conference in Berlin the first results of the fire tests for the SOLIT2 project sponsored by the Federal Ministry of Economics and Technology were made available to a wide circle of experts.

Within the scope of the series of lectures Dr. Roland Leucker (STUVA) representing the SOLIT2 consortium delivered a paper on “Results of Fire Tests to assess the Efficiency of Water Mist Fire Suppression Systems in Road Tunnels”. The paper has also been published in the Conference Proceedings as well as in tunnel 8/2011 (December issue). Further research results based on SOLIT2 were also contained in the paper presented by Max Lakkonen (Fogtec) captioned “State of the Art Fixed Fire Fighting Systems for Road and Rail Tunnels: From Fire Tests to Implementation”.

Following 2 years of intensive research work sponsorship of the project will cease at the end of March 2012. The project’s objective was to investigate the manifold inter-actions between water mist fire suppression systems and conventional safety facilities in tunnels. The execution of more than 30 lorry fires on a 1:1 scale in summer 2011, enabling the scientific developments to be substantiated through real measurements data, represented a milestone in the research activities. The knowledge obtained enabled potential savings in the overall safety system to be identified and to develop solutions suitable for practice.

The SOLIT2 project was represented at the exhibition with its own stand to present the research results. A large number of interested visitors took advantage of the opportunity to obtain first-hand information about the project (Fig. 7).

An international conference will be held in Berlin on June 27 and 28, 2012 with simultaneous translation German/English as a closing event with further exclusive reports on the results obtained from the SOLIT2 research project. Further details on this event are available from www.solit.info or directly from the STUVA. 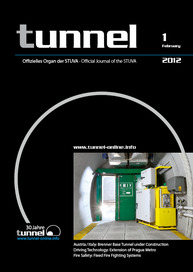 Once again more than 1500 experts from the field of underground construction will get together for the 2015 STUVA Conference, the international forum for tunnels and infrastructure, held from December...

Sophisticated Two-Day Lecture Program While the session on tunnel construction was held in the the large Harmonie conference hall, the series of lectures for tunnel operation was located in a...