In the past 100 years some parts of Mexico City have sunk by roughly 12 m – corresponding to the height of a 4-storey high house. The bulk of the city is constructed on swampy subsoil and as more groundwater is extracted from this swamp than can be replaced by precipitation, the terrain becomes ever more compact and the city above with a population of 20 million inhabitants continues to subside (Fig. 1). The “Emisor Central”, Mexico City’s main wastewater collector completed in 1975, continues to sink with it. Its gradient is becoming increasingly more unfavourable so that in the interim it has lost around 40 % of its original capacity of 170 m³/s. In parts this gradient has reversed so that pumps must be applied to carry the sewage. Year by year serious floods result because the wastewater system is no long able to cope with the masses of rain.

In mid-2008 CONAGUA, the national water board in the Mexico Ministry for the Environment, embarked on the construction of the “Tnel Emisor Oriente”. With an internal diameter of 7 m, it will transport up to 150 m³ of sewage per second over a distance of 63 km beneath the capital and the federal region of Mexico towards the federal region of Hidalgo. The authorities and the population are convinced that the world’s biggest sewage project will reintroduce an element of quality to life in the city.

A consortium of 5 companies is involved in building this giant scheme. In February 2008, Herrenknecht was commissioned to deliver 3 EPB Shields for the Tnel Emisor Oriente, which have to drive 3 tunnel contract sections with a total length of some 30 km.

The first machine S-497 (section 1) mainly passes through clays and silts with a high water content between Shaft LO and L3a (Fig. 2). Shield S-498 is deployed for contract section 2 between Shaft L5 and L10. It mainly encounters over-consolidated silty sand and loam and considerably higher water pressures than in section 1.  The third EPB Shield S-519 (section 6) largely encounters substantially more heterogeneous conditions – driving in over-consolidated clays up until February 2012. As it progresses the S-519 can expect a geological section with rocky zones comprising conglomerates, breccias and pyroclastic sediments and blocks as well as mixed face conditions with soft and hard material. Given a maximum overburden of in excess of 150 m at the same time high water ingresses and pressures are anticipated.

The 3 Herrenknecht EPB Shields are essentially designed for the geological conditions as well as the depth of the tunnel extending down to 150 m (Fig. 3, Table 1).

Consequently the EPB Shields and their installations were devised for operating pressures of up to 7 bar and can be adapted corresponding to the heterogeneous subsoil conditions.

The cutting wheel design permits the cutting knifes and rippers to be replaced by disc cutters in other words so that either soft ground or solid rock can be tackled. In order to enable the flow of material in silty and clayey geology the cutting wheel of the S-497 and S-498 is provided with a large opening ratio in the critical central area. On the other hand for driving the S-519 in rockier sections the cutting wheel centre is designed in such a way that it can be fitted with disc cutters. A total of 8 openings are to be found in the cutting wheel in order to condition the subsoil in an optimal manner.

The screw conveyor with 900 mm diameter extracts the soil and primarily is responsible for the pressure conditions in the extraction chamber. The S-497/498 also possess a machine belt conveyor with discharge onto a tunnel train as well as solid matter pumps for further transportation of material. As a result the EPB Shields can thus be adapted to the geological conditions. The S-519 carries the excavated material on a tunnel belt conveyor as in this case the ground conditions would make it more difficult to slurify and discharge by means of pumps.

The solid matter pumps that are applied are particularly suitable for discharging soft, cohesive soil with a high water content and can also be used for catering for very high supporting pressures. The pump discharge principle already proved itself in Mexico for the Rio de la Compania project (EPB Shield S-364, advance from 2007 till 2009). Pumping tests (Fig. 4) were undertaken on site under real conditions to establish the pumpability of the new project conditions prior to the S-497/498 drives commencing.

The successful tests indicated that correspondingly conditioned muck can be pumped up to a distance of approx. 1.5 km without a relay station being needed as a booster in the tunnel. Even greater distances can be bridged by injecting lubricants and smearing the bore wall with water, bentonite or additives.

The main advantage of pump conveyance results from being able to transport material vertically in narrow starting shafts. The material to be pumped should ideally possess a high natural water content or be in liquid form and have a grading curve as widely varied as possible to prevent material being deposited in the bore. Sticky clay is also capable of being easily pumped (Fig. 5). A conventional vertical conveyor, which would be needed in the deep starting shafts, would come up against its limits given these conditions. On EPB Shields S-497 and S-498 there are in each case 2 solid matter pumps to the left and right of the screw conveyor discharge on gantry No. 2 providing for a maximum soil discharge of 360 m³/h.

The screw conveyor discharge and the pumps are connected via flexible hoses in order to assure that the shield can be steered. The solid matter line on the last gantry is extended continuously via rotary joint shears to up to 6 m with DN200 diameter (Fig. 6). The rotary joint shearing device is retracted after 6 m and 6 m of pipeline is installed as an extension.

On account of the long driving section of up to in excess of 10 km high efficacy of the material logistics on the gantry system is essential to ensure the excavation runs as smoothly as possible. For example a quick unloading device for the segments was installed to reduce the cycle time for the train logistics and to make sure the train moves out of the gantry as fast as possible.

The constricted space conditions in the launch shaft given only 16 m diameter with a depth varying from 27 to 52 m represent a particular challenge for every site team during assembly of the machine and especially during the start-up in contract sections 1 and 2 (Fig. 6).

In the narrow launch shafts the TBMs could only be assembled and pushed forward successively. They first actually reached their final state including all gantries in the tunnel after 95 m had been driven. The gantries first remained on the surface whilst S-497 and S-498 began driving from Shaft LO and L5. The shield machines were connected with the relevant components for driving via an “umbilical cord”. Herrenknecht together with the jobsite team devised the start-up situation with hoses and cables, which were fitted with special stress reliefs on account of their length and their weight. A specially developed system involving cranes, booms and guide pulleys was applied, so that the cables and hoses belonging to the “umbilical cord” could accompany the TBM drive.

The range of products supplied embraced tunnel belt conveyors (H+E Logistik), surveying systems (VMT GmbH), rails for laying as required and rolling stock for the back-up and train logistics (Maschinen- und Stahlbau Dresden, MSD), relay stations for pump conveyance, hoses, cable and lines for the shield start-up as well as a large number of man-months for provision of personnel and engineering, Thanks to this extensive package interfaces in the project were optimised and resources saved.

7 Hope for the sinking City

The Mexican water board CONAGUA has embarked on a major project in the form of the Tnel Emisor Oriente scheme, which is unparalleled anywhere in the world – and absolutely essential for Mexico City itself. Apart from being able to coordinate the groundwater table more effectively in future thus preventing the city subsiding from even further, the more than 60 km long collector devised to provide a more effective sewage system and enhance the quality of life in the mega-city is of decisive importance. Thanks to Herrenknecht’s EPB Shields the tunnellers are making excellent progress. The solutions developed such as the start-up in narrow and deep shafts or the solid matter pumps that are applied, were the proper response in meeting the scheme‘s challenges. 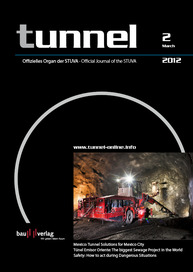 Dry Ground for Mexicos Capital: Half the Tunneling-Work is done

The drainage system of the metropolitan region is no longer sufficient to maintain an adequate water discharge, especially due to the increasingly unfavourable gradient of the Emisor Central...

Lok Home: We have regained our position as a leading supplier

In February, 2010, the Robbins Company invited to Corpus Christi, Texas/USA, to join the launch and assembly of three EPBs for the Emisor Oriente Project in Mexico City. During the ceremony we asked...

The Valley of Mexico consists of a drained clay lake bed interspersed with volcanic rock and boulders from long dormant, buried volcanoes. Chronic groundwater depletion has resulted in soils that sink...