As STUVA CEO Dr.-Ing. Roland Leucker pointed out during the opening ceremony, such a wide response had not been evident during the run-up to the event. As opposed to 70 people taking part in 2014, this was undoubtedly a substantial increase. Some 85 % of the participants were from Germany, followed by more than 10 % from Switzerland and Austria. There were also those taking part, who hailed from Italy, Luxembourg and the Czech Republic.

As Leucker went on to say: “our conviction that such a forum is necessary among expert circles did not solely apply to the number of participants. Many engineering structures have in the meantime reached an age at which a thorough redevelopment is necessary – as for example the oldest rail tunnels in Europe, which have now been in operation for over 175 years. Injection technology is applied regularly to remedy damage affecting the waterproofing of such structures”.

Injections are also increasingly being selected for tackling ground problems and in some cases represent the sole technically feasible or economically purposeful possibility. In addition, extensive new developments have resulted in injection technology in recent years. These were dealt with in the papers and were also a part of the fair.

A total of 16 lectures were presented within the scope of the main groups of topics “International Ground Sealing”, “Improving Structures”, “Codes of Standards and Legislation”, “Improving the Ground” and “Waterproofing Structures”. The various sessions were alternately chaired by Dipl.-Ing. Jörg de Hesselle, owner of the IBE-Ingenieure company, and Dr.-Ing. Christian Thienert, who is in charge of the “Tunnelling and Construction Technology” division at the STUVA.

Numerous papers at the forum dealt directly with challenges and problem complexes connected with tunnelling projects. During the group of topics dealing with international projects relating to sealing the ground, Andreas Heizmann from the Marti Geotechnik GmbH looked at “Geotechnical and technical Aspects in Execution of Waterproofing Injections given major Presence of Water in Pressure Water Tunnels”. Heizmann explained that in the case of double or single shield tunnel boring machines (TBMs) with a small diameter and a segmental lining, possibilities for injecting the ground either in advance or following up are severely restricted during tunnelling. Waterproofing against pronounced ingressing water with high water pressures require the creation of an injection ring in order to reduce the effective water pressure around the tunnel and to relieve the lining. In the example presented, a water inburst of approx. 370 l/s was the outcome during the TBM drive. The result was the lowering of the groundwater level, leading to sources and wells drying out as well as damage resulting from subsidence on the ground surface.

The injection operations that were undertaken were successfully accomplished within six months. The problems faced included the setting up of the drilling rig and the grouting facilities within a constricted space, drainage holes drilled in the floor, waterproofing the joints and injections in the annular gap. Once these preliminary activities had been completed, rock grouting was undertaken, in some cases in places with flowing water, until the ingressing water was reduced to 20 l/s in the critical area.

“Polyurethane injections in hot pressurised Water Springs for the Vaðlaheiði Road Tunnel in Iceland” was the caption for the paper presented by Ruben Schmid, CEO of the waterproofing company Rascor. Since August 2012, a two-lane road tunnel with a length of 7200 m through the Vaôlaheiôi mountain in the north of Iceland has been under construction by means of drill+blast. The tunnel penetrates a hot water spring zone with temperatures in excess of 60 °C. On account of the large amounts of water that prevailed, it was not possible to complete waterproofing solely by using cement injections as originally planned. A cleft running parallel to the tunnel was to be injected with polyurethane resin. The high prevailing temperature proved to be a problem as the material was unable to cater for grouted sections that matched requirements. As a consequence, individual formulas for the injection agent for this special application were produced.

Around 15 km of tunnels are to be driven in swelling anhydrite gypsum keuper for the Stuttgart 21 project. Waterproofing injections are being executed in fissured rock in order to prevent water escaping into these layers or at least to restrict it. This was the topic of a lecture delivered by Dr.-Ing. Martin Wittke, WBI GmbH. These injections are aimed at sealing the loosening zones resulting from tunnelling, which possess greater permeability compared to the original status. Permeability coefficients of roughly 10-7 m/s must be attained by the grouting process. Injection pressures must be restricted to ensure that the rock is not destroyed by grouting thus creating additional paths for the water. Against this background low-viscosity grouting agents such as acrylate gels have to be used.

The paper presented by Dipl.-Ing. Joachim Meier, project manager for drilling and injection technology with Implenia Spezialtiefbau, honed in on compensation grouting for inner urban construction projects. It is being applied increasingly in conjunction with important current metro projects as a supporting measure. In the past decade, drilling and injection technology has been further developed together with measurement technology and data administration so that today a minimally invasive technique for securing major areas is available. Just like every other process, compensation grouting possesses advantages, opportunities and chances – as well as risks and limits, which were demonstrated in the lecture by dint of examples of applications with different types of soil and sophisticated structures.

Leaky structural joints represent a widespread problem in the case of concrete structures set in groundwater ,explained Dipl.-Ing. Hendrik Schälicke from the consulting engenieers Prof. Dr.-Ing. Dieter Kirschke. Tunnels with segmental lining created by TBMs are also affected. Targeted subsequent sealing by means of joint strips for necessary follow-up injections represents an effective alternative to the complex process of drilling through concrete normally applied for resealing joints. This waterproofing method makes use of the direct path via the structural joint. It is drilled through using a special injection drill needle for injecting the joint gap or backfilling the joint seal. The needle is abandoned in the drill hole after grouting is completed, providing permanent and pressure-tight closure.

The next Forum on Injection Technology will be held on November 21 and 22, 2018 in the Maternushaus in Cologne. 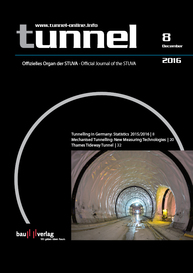 Forum on Injection Technology 2018 in Cologne

As in the previous years, the Forum on Injection Technology was staged in conjunction with the partners Bauverlag, IBE-Ingenieure and STUVA (Research Association for Tunnels and Underground...

From 26 to 28 November 2019, the STUVA invites you to Frankfurt for the Family meeting of the tunnelling industry. Once again, about 3000 experts from more than 20 countries are expected. For two...

Targeted Sealing of Leaks in Segment Linings In targeted sealing of leaks, the direct route through the joints between segment linings is used in order to drill through the gasket and inject grout on...