In the few cases of fire that have already occurred, intense fires were sometimes observed that were difficult for emergency services to extinguish completely. Initial experiences with such fires (and statements by the Tesla company, for example, that at least 11 000 litres of extinguishing water would be required for a fire in their cars) have led to questions and uncertainty. A well-founded assessment of the consequences for fire protection requirements in underground transport facilities has so far hardly been possible, if at all.

Initial Findings and Recommendations from the SUVEREN Research Project

The SUVEREN project (Safety of Urban Underground Structures due to the Use of New Energy Carriers) also dealt with fires involving hydrogen and gas-powered vehicles, but the focus was on cars with lithium-ion batteries due to the urgency of the open questions. A consortium consisting of the German Federal Institute for Materials Research and Testing (BAM), STUVA and the company Fogtec carried out the investigations. The German Federal Ministry of Education and Research provided significant funding for the project.

The development of practical recommendations for dealing with NECs in underground transportation facilities was one of the most important goals of SUVEREN.In the following, the work content processed by Fogtec and relevant results are reported.

In the initial phase, the consortium focused on the very insufficient data available on the fire behaviour of lithium-ion batteries. In order to obtain reliable and detailed knowledge, fire tests were carried out under the most realistic conditions possible and on a 1:1 scale. IFAB GmbH, Berlin, was responsible for planning, preparing and conducting the fire tests.

In the course of the project, several test series were carried out with different objectives. The battery packs and modules that were used were each fully charged and came from series-production vehicles of a German manufacturer. In the first series of tests, the aim was to gain basic knowledge about the fire behaviour of lithium-ion batteries, from ignition to the cooling process. To determine the temperature distribution and heat release, a new test stand was designed and constructed (Fig. 1). Various gas sensors, a large number of thermocouples, devices for measuring the radiant heat and the mass loss rate as well as thermal imaging cameras were positioned in it. The flue gas composition was also investigated with a highly sensitive Fourier transform infrared spectrometer (FTIR), which analyses the flue gases down to the low single-digit ppm range. In addition, the response behaviour of all major types of commercially available fire and smoke detectors was investigated.

The tests on fire detection and extinguishing showed that, despite the special fire behaviour of lithium-ion batteries, successful intervention is possible in principle both manually and by means of stationary fire-fighting systems. A summary of the results is planned to be published together with a guide for fire protection in underground transportation facilities in the first half of 2021.

In the SUVEREN project, a fire protection concept for car fires was therefore developed especially for multi-storey and underground car parks. The findings also confirm the assumption that a tunnel built according to the current state of technology (e.g. RABT, etc.) will withstand a fire of one or more passenger cars (regardless of whether they are conventionally or battery driven) sufficiently and well and that the measures for ventilation and escape are sufficient.

Other considerations may become necessary with regard to large vehicles such as trucks and buses that are powered by batteries or also hydrogen. Whether and to what extent the effects due to the composition of flue gases from fires with lithium-ion batteries necessitate revisions to the previous fire protection requirements is part of the analysis of the data obtained in the trials that is currently underway. In any case, the increasing equipment of buses and trucks with new energy sources should be closely observed. Further investigations with additional and larger fire tests are necessary in this area in order to reliably answer questions from fire brigades and operators in this regard.

Further information on the research project can be found on the SUVEREN website. 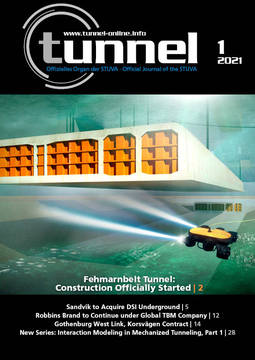 Investigation of Fires with Electric Vehicles in Underground Traffic Areas

In the few cases of fire that have already occurred, intense fires were sometimes observed that were difficult for emergency services to extinguish completely. Initial experiences with such fires (and...

Research Project with the Involvement of the STUVA: Improvement of the Safety in Under­- ground Transport Areas in Cities when new Energy sources are used

English and French Editions to Be Published by the End of 2021 Train fires in railway tunnels pose extreme challenges for fire brigades. Such events are extremely rare. But when they do occur,...