The Marieholm Tunnel in Gothenburg is a road tunnel with three lanes per direction and an evacuation tunnel. It is devised for more than 100 years service life and is to be built as an immersed tunnel just like the 300 m long, two-track Söderström Tunnel. Towards this end, three part-sections each 100 m in length are constructed in a dry dock and then submerged in a trench excavated on the riverbed. The tunnel sections at both sides of the River Göta älv are produced in deep construction trenches by means of cut-and-cover. The construction contract also includes all technical installations as well as servicing the almost 500 m long tunnel for a period of five years after it becomes operational. This is planned for late 2020. The Züblin Scandinavia AB/Boskalis JV was commissioned to plan and build the Marieholm Tunnel. The Swedish Transport Administration, Trafikverket, is calculating with total costs of some 170 million euros. ⇥G.B. 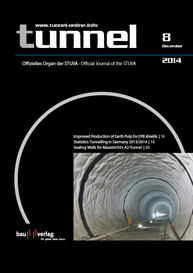 The new Citybanan is a 6 km long, 2-track tunnel devised to relieve the S-Bahn transit system (more than 350 trains daily) in the centre of Stockholm and links Tomteboda on the northern fringe of the...

Fehmarn Crossing  Data and Facts on the Project

At present the Vogelfluglinie ferries travel between Puttgarden on the German island of Fehmarn and Rødby on the Danish island of Lolland. In the process, they cross the 19 km wide Fehmarn Belt....

The Citybanan is a 6 km long, twin-track S-Bahn tunnel (over 500 trains/day) in the middle of Stockholm and provides the link between Tomteboda on the northern limits of the city with the suburb of...

Parliamentary State Secretary Enak Ferlemann: In a comprehensive comparison of the conceivable variants, the immersed tunnel also proved to be the superior variant in the sensitivity analyses". He...