The new Citybanan is a 6 km long, 2-track tunnel devised to relieve the S-Bahn transit system (more than 350 trains daily) in the centre of Stockholm and links Tomteboda on the northern fringe of the city with the suburb of Södermalm in the south. The main element is the Söderström Tunnel between Södermalm and Ridderholmen with a 3 % longitudinal incline beneath the Söderström, an arm of the Malaren Sea. It is devised as an underwater bridge consisting of 3 immersed part-sections. It is not possible to set it up on the soft seabed. Each prefabricated twin-track tunnel section (20,000 t) is 100 m long and is situated on 4 supports at a depth of roughly 20 m in the water. The Söderström Tunnel links up with the tunnels already excavated in the rock at both banks.

In May 2013, the first tunnel section was successfully submerged within 48 hours. The position was determined using GPS before the immersion process was introduced by filling the 1,500 m³ capacity water tanks. All measure­ment results were continuously recorded for evaluation purposes at a control station so that it was possible to maintain the part-section of the tunnel in its intended position at all times in spite of prevailing winds of up to 15 m/s. In the meantime, the 3 prefabricated part-sections totaling 300 m in length have been submerged for the immersed tunnel/undersea bridge. The Söderström Tunnel – costing some € 200 million overall – is due for completion by mid-2014 so that the Citybanan can start operating in 2017. G.B. 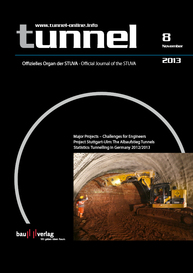 The Citybanan is a 6 km long, twin-track S-Bahn tunnel (over 500 trains/day) in the middle of Stockholm and provides the link between Tomteboda on the northern limits of the city with the suburb of...

The Marieholm Tunnel in Gothenburg is a road tunnel with three lanes per direction and an evacuation tunnel. It is devised for more than 100 years service life and is to be built as an immersed tunnel...

A tunnel is to be produced in Rastatt after all in conjunction with the 4-track upgrading of the Rheintal railway. It will undercut the entire bounds of the city as well as the Federbach lowland area...

Fehmarn Crossing  Data and Facts on the Project

At present the Vogelfluglinie ferries travel between Puttgarden on the German island of Fehmarn and Rødby on the Danish island of Lolland. In the process, they cross the 19 km wide Fehmarn Belt....