Train fires in railway tunnels pose extreme challenges for fire brigades. Such events are extremely rare. But when they do occur, hundreds of people can be put at risk. For four years, the Didactics and Development Team (DDT) of the International Fire Academy in Switzerland has been working on an operational training course for railway tunnels in order to be able to provide fire brigades with standardised tactics for Switzerland. The training, with supplementary technical knowledge and help in preparing for operations, is published in the technical book “Brandeinsätze in Bahntunneln” (Fire Operations in Railway Tunnels) and is supplemented by two leaflets. The fact sheets are already available in four languages (German, English, French, Italian); the book will additionally be available in French and English by the end of 2021.

For more than ten years, the International Fire Academy, based in Balsthal, Switzerland, has been Europe‘s leading centre of excellence for operations in tunnels and other underground transport facilities. The fire academy has an extensive training infrastructure, including road and railway training tunnels. There, the central challenges of tunnel operations can be practised in realistic scenarios.

Firefighting Procedures are a Mandatory Basis for Training in Switzerland

The basis for the trainings are the tunnel firefighting procedures developed by the DDT of the International Fire Academy. Both the procedure for road tunnels, which was published in 2014 in the manual “Brandeinsätze in Strassentunneln” (Firefighting Operations in Road Tunnels), and the procedure for railway tunnels as the basis for the now published manual “Brandeinsätze in Bahntunneln” (Firefighting Operations in Railway Tunnels), were approved by the Swiss Fire Brigade Inspectors‘ Conference. They are thus a binding training basis for all fire brigades in Switzerland. The courses offered by the International Fire Academy for fire brigades outside Switzerland are also based on these operations manuals.

For the development of its railway procedures, the DDT cooperated with representatives of Swiss railway fire brigades and other railway experts, because the railway system is not very familiar to regular fire brigades. This is especially true for the operational procedures and a multitude of technical terms. But what do fire brigades actually need to know about an emergency in railway tunnels? This has been a long struggle. In all decisions - whether about required knowledge, equipment or even special vehicles - the guiding principle was: as little as possible, as much as necessary. An important result of the discussions are, for example, safety rules defined especially for fire brigades, which are fundamental for the entire conduct of the emergency forces on railway facilities.

The technical book “Fire Operations in Railway Tunnels” is divided into six chapters: After the introduction, basic knowledge relevant to the operation is conveyed under the heading of infrastructure and operations. The hazard theory begins with the safety rules and then refers to the specific hazards during operations at railway facilities and in railway tunnels. The chapter on operational tactics essentially documents the operational theory and illustrates it with examples of application. The tactics are supplemented by information on operational technology and checklists for mission preparation.

Concise Presentation of All Topics

Like the previous volume “Fire Operations in Road Tunnels”, the design of the book is characterised by a comprehensive illustration of all topics through photos and graphics. Nearly 200 illustrations illustrate all central statements. In many cases, graphics have been developed to bring the findings and procedures to the point in a clear and quickly comprehensible manner. This makes the complex topic of the railway quickly accessible from the perspective relevant to fire brigades.

Fact Sheets and Template for Preparation of Operations

Each book comes with two fact sheets that provide a quick, illustrated overview of the most important contents of the operational theory and railway courses at the International Fire Academy. The leaflets can be downloaded free of charge for training purposes from the “Knowledge” section of the ifa website ( www.ifa-swiss.ch/en/tunnel/knowledge ). They can also be ordered as printed leaflets.

In addition to the book, the ifa also offers a file template for deployment preparation in the Knowledge section of its website. The template can also be downloaded free of charge and filled out with the required information on the tunnel facilities in a fire brigade‘s area of operation.

www.ifa-swiss.ch
This article appeared in 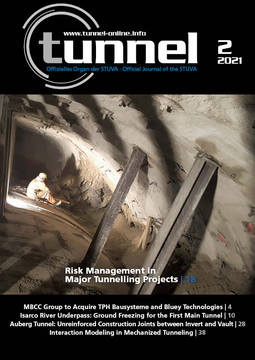 The International Fire Academy at Balsthal, Switzerland, as a renowned European fire brigade school and academy, has published its teaching material in the form of a German-language manual captioned...

Evaluation and Advancement of Safety Concepts for Railway Tunnels

It is half time for the SIKET research project on evaluation and advancement of safety concepts for railway tunnels. It has been running since September 2018, and thus it was time for an interim...