At around 50 km, the Channel Tunnel between Co-quelles, in France, and Folke-stone, England, is currently the world‘s longest rail tunnel. It is used by Eurostar trains on their route from London to Paris or Brussels. A total of some 48,000 persons are conveyed by rail under the English Channel every day, when trains carrying cars and lorries are added. Cars are transported in special fully enclosed carriages, the drivers and passengers remaining with their vehicles during the journey, whereas lorries are driven on to special transporter wagons in shuttle trains. The lorry-drivers use a special Club carriage marshalled at the front or back of the train during the journey.

In 1996 and 2008, serious fires occurred during the 35 minute trip on these lorry shuttle trains. Luckily, it was possible to evacuate all persons via the service tunnel at the mid‑point of the main tunnel bores, with the result that there were no fatalities and only few serious injuries. These fires showed, however, that the British and French firefighters deployed encountered extreme difficulty in reaching the seat of the fire and applying effective firefighting. The elevated temperatures of up to 1300° C which occurred as the fires continued resulted in significant damage to the tunnel and to its operating equipment. The tunnel bore remained closed for around seven months following the fire in 1996; damage was assessed at around 250 million euro. The effects of the 2008 fire, with a closure period of only a few days, were slighter, but complete clearance for restoration of tunnel operation in the area affected by the fire was possible only in 2009.

Even after the first fire in 1996, extensive consideration was devoted to fire-safety equipping of vehicles. On the basis of the experience gained from the fire of 2008, and from further studies, it was decided to equip each tunnel with two so-called safe stations. The lorry shuttle on which a fire has been detected will in future continue to one of these safe stations in the tunnel, and then stop there at a precisely predetermined point, in order that the passengers in the Club carriage can be evacuated to safety immediately via an emergency exit into the other tunnel bore. The lorry fire on the shuttle wagon can then be precisely located and brought under control by means of an automatic firefighting system. The aim is that further spread of the fire should be significantly lessened, and that the firefighters can reach the seat of the fire more easily and more quickly. A simultaneous target is the significant reduction of damage to the tunnel structure and equipment, and of the costs for repairs and interruption to traffic compared to the aftermath of the previous fires.

On behalf of Eurotunnel, the tunnel operator, consultant engineers BG Bonnard & Gardel drafted a study which shows that, in the worst-case scenario, a fire on a shuttle train is capable of reaching a heat release rate of 200 MW before the extinguishing system is activated. Not only the train‘s maximum travelling time to the safe station, but also the complex ventilation conditions resulting from its slipstream, and multiple flow reversals due to pumping effects caused by the train in stopping and by the emergency fire ventilation system, were analysed.

A further stage examined the economic and technical feasibility, and the effectiveness, of various technologies. Spray deluge, foam extinguishing and water-mist systems were studied in parallel. Conventional spray deluge systems were found to be only poorly suitable, due to the limited capacity for water supply and removal in the tunnel. The concept of a foam extinguishing system was also rejected, in view of its significantly higher installation costs, more complex technology and possible hazard for injured or unconscious persons on the tunnel floor, for example. This decision was also backed up by the fact that tripping of a foam extinguishing system would subsequently necessitate extensive cleaning work, and a risk of corrosion.

The operator and the bilateral government safety committee decided in favour of a high-pressure water-mist (HPWM) system for the safe-station concept. Similar systems are already installed in a number of road tunnels in Europe.

Water-mist technology is based on the use of ultra-fine droplets of water which, due to their large specific surface area, evaporate within an extremely short time and are thus able, unlike conventional water-extinguishing systems, to absorb from the fire an extremely large quantity of energy. Rapid cooling therefore occurs immediately after activation of the system. The fine droplets of water also absorb a portion of the thermal radiation, reducing the exposure of tunnel components to heat, and facilitating the work of the emergency services.

The HPWM system at each safe station extends for a length of 870 m in both tunnel traffic bores, and is subdivided into twenty-nine sections. Up to three sections can be activated simultaneously in case of fire.

Water for each pair of safe stations is supplied via a central pump installation, which delivers water to the individual zones via a water main installed in the service tunnel. The water mist itself is generated by means of special nozzles installed in the left-hand and right-hand zones of the tunnel roof above the loading profile. The pipes

– which, like all the system equipment, consist of high-quality stainless steel – are screened off from the high-voltage overhead power-supply line by means of a special insulation system. Independent studies have demonstrated that water mist will not cause arcing, even up to a voltage of 30 KV.

Location of the seat of the fire is accomplished by means of an array of linear heat detectors developed specially for this application. The positioning of three detector cables in the tunnel cross-section means that even minor fires at higher flow velocities can be quickly detected and located with adequate accuracy.

A further monitoring function during a fire can be implemented by means of thermosensors installed in every zone of the HPWM system. This enables the firefighters and tunnel operator to monitor a possible fire and activate other sectors of the HPWM system if necessary.

The system is being installed in two phases. A system prototype is to be completed by the end of 2010 and will be used to verify the effectiveness and correct functioning of the system as a whole. This programme also includes 1:1-scale fire tests, which will be discussed below. A relative innovation for extinguisher systems are the extensive RAMS (Reliability, Availability, Maintainability and Safety) analyses of the complete system. Not only will the reliability and availability of the systems be verified and demonstrated in this context, the life-cycle costs of the overall installation will also be quantified. All four safe stations are to be completed by the end of 2011, well ahead of the start of the London Olympic Games in 2012.

The state-of-the-art and the current standards and codes for firefighting systems in tunnels (e.g. UPTUN R251 and NFPA 502) require that the effectiveness of the HPWM installation for the Channel Tunnel be demonstrated in 1:1-scale fire tests. It should noted here that, in view of the ventilation conditions, in particular, and the magnitude of any fire to be anticipated in the Channel Tunnel, no comparable facility has ever before been protected by means of firefighting systems. The effectiveness of the fire-detection and location system is also to be demonstrated. For this reason, the Institute for Applied Fire Safety Research (IFAB) has

performed an extensive programme of tests in the San Pedro des Anes test tunnel in Spain, with the assistance of other specialists from STUVA, efectis France and SETEC. The cross-section of the Channel Tunnel and two lorries were replicated in this special test tunnel (Fig. 1). Dummy “lorries” consisting of wooden pallets were used as the fire load along a length of tunnel of 40 m. Since, in this particular case, the effectiveness of the HPWM installation in case of a 150 MW fire was to be demonstrated, the dummy lorries were ignited with diesel-pool fires, with an initial fire load of around 25 MW. The HPWM system was activated when 150 MW was reached. The ventilation flow was reversed simultaneously to activation of the HPWM installation, in order to simulate at the same time the functioning of the emergency fire ventilation system.

More than 150 sensors were installed for monitoring of temperature, thermal radiation, pressure, gas concentrations and flow velocity throughout the test tunnel, in order to obtain measured data from the fire tests. A further “fire target” was positioned at a distance of 1.50 m on both sides of the actual fire load, to permit study of the spread of the fire.

Extremely rapid propagation of the fire was observed following ignition of the initial fire load, as a result, in particular, of ventilation velocity (Fig. 2). A heat release rate of around 200 MW was reached within a few minutes of ignition, for example. A significant reduction in temperatures and thermal radiation were noted after an extremely short time following tripping of the HPWM system. An extremely rapid fall in heat release rate was also achieved, in combination with the reversal of flow due to the emergency fire ventilation system, in particular. It was thus illustrated that rapid activation of the HPWM installation makes it possible to significantly lessen the fire‘s effects on the tunnel infrastructure, and thus the potential damage. It was also demonstrated that an active HPWM system makes rapid firefighting by the fire-brigade possible, with a simultaneously greatly reduced danger level.

Despite the fact that ever more vehicles are being equipped with firefighting installations in their equipment and passenger compartments, a rational potential for providing safe emergency stopping points in long rail tunnels has nonetheless now been developed, in the form of the safe-station concept. This permits not only improvement of the evacuation conditions for persons in the tunnel, but also a direct amelioration of the effects of a fire, and thus a significant reduction in fire damage. It therefore has great potential benefits in reducing both repair costs and loss of tunnel availability after a fire. 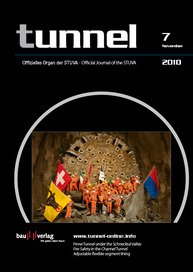 The roughly 50 km long Eurotunnel opened in 1994 forms the rail link between Calais in France and Folkestone in the UK, in other words between the continent of Europe and the British Isles.  Up to...

Serious fires occurred in 1999 in the Mont Blanc and in the Tauern tunnels and in the Gotthard Road Tunnel in 2001. As a result, the evacuation conditions for tunnel users were improved. Nonetheless,...

The City Tunnel beneath downtown Leipzig will shortly be opened (Fig. 1). On the occasion of a full-scale fire protection drill, the Drägerwerk AG & Co. KGaA provided a varied and interesting...