From 31 May to 7 June both the WTC 2013 and the 39th general assembly of the “International Tunnelling and Underground Space Association” will take place under the motto “Underground – the way to the future”. The Swiss Tunnelling Society (STS) is the host in the beautiful Swiss city of Geneva.

Switzerland is well known for both its scenic landscapes and its outstanding infrastructure as well as its well-developed transportation system. The many innovative solutions employed in the construction of Switzerland’s numerous tunnels and underground facilities have demonstrated the nation’s pioneer spirit time and again, underscoring its position at the top of the tunnel construction technology field.

The organising committee of the WTC 2013 has shown creativity and commitment in making the World Tunnel Congress 2013 an outstanding experience in many respects. In addition to traditional elements such as the ITA CET training course (this year covering the topic of Auxiliary Construction Measures), several events will be held for the first time. For example, there will be a presentation forum within the exhibit and a special session for Swiss tunnel construction students. Among the several totally new programme points, two technical events of the ITA tech Committee will take place. One is the so-called deminar on 31 May in the Hagerbach test gallery. The deminar consists of a seminar in which the theoretical aspects will be explained and of a practical demonstration of the application of sprayable membranes for sealing tunnels. The other is the “ITA tech Innovation Forum” to be held, at which the guidelines prepared by ITA tech will be presented.

The non-technical areas of the World Tunnel Congress 2013 have also received a good deal of attention. The reception will take place against the backdrop of the Musée Ariana, and the traditional banquet will be held on Wednesday evening on board three large steamships on Lake Geneva. In addition to these, numerous smaller cultural events will take place. Various technical excursions will be offered after the WTC 2013 which will not only take participants to impressive tunnel construction sites, but also to some of Switzerland’s most scenic destinations as well as to interesting manufacturing operations in which typical Swiss products are made. 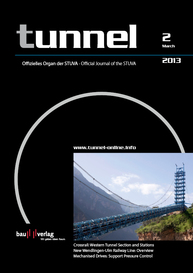 From June 10 to 12, 2015, the Swiss Tunnelling Society (STC) is staging its annual Swiss Tunnel Congress (STC) for the 14th time in Lucernes KKL. As a significant platform for clients, designers,...

The 15th Swiss Tunnel Congress (STC) will take place in the Kultur und Kongresszentrum Luzern (KKL) from 15 to 17 June 2016, organised by the Swiss Tunnelling Society (STS). The annual STC with...

The 17th edition of the Swiss Tunnel Congress (STC) will be held from 13 to 15 June at the Lucerne Culture and Convention Centre. The STC 2018 will take place with its tried and tested format again...