Significance of the Ceneri Base Tunnel

The ramps of the present railway route at the Ceneri possess gradients of up to 26 ‰. If the Ceneri Base Tunnel were not to be built additional locomotives would continue to be needed for heavy goods trains after passing through the Gotthard.

At the behest of the Canton of Tessino the “Bretella Locarno” will be produced in conjunction with the building of the Ceneri Base Tunnel. It is located near the CBT’s north portal and serves regional traffic in Tessino. It will cut the travelling time between Locarno and Lugano by more than half: from the present 55 min to only 22 min.

Overview of the Ceneri Base Tunnel Project

The tunnel system for the Ceneri Base Tunnel calls for 2 single-track bores each 15.4 km long. They run from Camorino near Bellinzona to Vezia in the vicinity of Lugano. The centre distance of the single-track bores amounts to roughly 40 m. Every 325 m the bores are linked by cross-passages (Fig. 1).

The sophisticated 2.7 km long, open section to the south of Giubiasco Station to the north portal of the CBT in Camorino represents part of the project. This section includes 2 long viaducts with lengths of 1,000 and 400 m respectively, a 4-track bridge above the motorway with tricky building conditions while still maintaining road and rail traffic as well as the upgrading of the existing rail line on the embankment from 2 to 4 tracks. To the south of the Ceneri Base Tunnel the new line directly links up with the SBB’s existing route. The tunnel itself will largely be excavated from the Sigirino intermediate point of attack towards the north and south.

The tunnel is scheduled to become operational in December 2019. The Ceneri Base Tunnel project will cost a total of some 2,200 mill, CHF (cost level as of 2005, without VAT and the rail technology).

In April 2005 the preliminary work began in Sigirino and Camorino on the basis of the plan approval procedure of the Swiss Department for the Environment, Transport, Energy and Communications (UVEK) from October 23, 2005.

The constricted space conditions in Sigirino made the preparatory work for the installations more difficult. However today good connections are available both to the cantonal road as well as to the motorway. A works rail link for supplying cement and aggregate for cement is in operation. The fact that the bulk of the material is delivered per rail belongs to the environmentally conscious material management and transportation concept of the client – ATG.

In Camorino a number of buildings had to be demolished to allow the infrastructure facilities to be set up. Spoil mainly obtained from the Gotthard Base Tunnel was used to produce fills. Furthermore a provisional bridge was built over the cantonal road, which will be used as a site access for a 5 year period.

So far in Sigirino the work has centred on the “Sigirino intermediate point of attack” (contract section 851). Underground operations started in autumn 2007 and have been completed. This work embraced excavating the FIS (Finestra intermedia di Sigirino) access tunnel and the installation chamber (Caverna operativa). The contract section is worth some 85 mil. CHF (2006 price level – without VAT).

The exploratory tunnel CPS (Cunicolo di prospezione Sigirino, 3.1 km long; 25 m² cross-section), which is set up only a few hundred metres away belongs to the Sigirino intermediate point of attack. It was produced between 1997 and 2001. The geology in this area is particularly well known thanks to its deployment (Fig. 3).

The FIS (Finestra intermedia di Sigirino) access tunnel was driven by a tunnel boring machine (TBM). The choice of a TBM excavation was decided on for construction technical and geological reasons. The noise aspect was co-determining. The community of Sigirino would have been badly affected if drill+blast had been chosen. The access tunnel is 2.3 km long, possesses a gradient of 4.8 % and a diameter of 9.70 m (74 m²). The tunnel boring machine was launched on February 15, 2008 and the breakthrough already took place on November 6, 2008. The rates of advance varied substantially from 26 m/day to less than 10 m/day (Fig. 4).

Together with the TBM drive the first chamber (Raccordo anulare (RA), which joins the CPS with the FIS) and the disassembly chamber for the TBM were excavated using the CPS exploratory tunnel. The larger chamber was excavated following the completion of the FIS to be able to use it as a better access.

The CAOP, the “Caverna operativa” is a system of chambers located at the foot of the FIS and CPS, which serves the construction logistics. The 7 chambers possess different cross-sections, which range from 105 to 264 m². The concrete plant is set up in the largest of these chambers. The other chambers serve construction logistical purposes. The decision to place the concrete centre underground was made for construction logistical reasons. Furthermore it was also possible to shield the community of Sigirino from the noise, which would have resulted from the necessary 24-h operation of the plant. It took roughly a year to excavate the chambers after completion of the FIS.

Contract section 851 also contained important options designed to optimise the overall construction programme. These options relate to the driving of a tunnel section of roughly 1 km. This drive can take place either in the north or the south and can be commissioned by the client in 500 m stages. As work was progressing well and the timetable was more than being adhered to, the ATG chose an option of 500 m driven towards the south. This drive has been concluded (Fig. 5)

Since May 2008 work has also been in progress at Vezia around the CBT’s north portal. Excavation of the pre-cut is finished. Now work is commen-cing on a 300 m counter-drive, a 170 m cut-and-cover tunnel and the portal.

The Vezia construction site is the smallest of the 3 sites for the Ceneri Base Tunnel. However, it involves a high concentration of technically difficult tasks. This results especially from the fact that only short distances to other infrastructure facilities and existing buildings are involved. Close to its south portal the CBT will also cross over the Vedeggio road tunnel, which is also being built, with only a 4 m gap. The 2 projects are constantly coordinated and fine-tuned. The pre-cut and the cut-and-cover tunnel are located in the park of the Villa Negroni, a protected building dating back to the 17th century. The pre-cut’s eastern wall, which is up to 25 m high, is set up only a few metres from the building.

Work on the counter-drive at the north portal commenced in October 2008. This work includes in particular the undertunnelling by mining means of the motorway in soft ground with an overburden of scarcely 10 m and the creating of the chambers for the northern connection with a length of approx. 700 m. Furthermore, contract section 853 also includes the up to 2 km long additional counter-drives foreseen as an option, serving as a measure for safeguarding deadlines.

Currently work on the 50 m long section undercutting the motorway is forging ahead. In keeping with the forecast the drive encountered rock after a few metres. The drive is carried out via drill+blast involving moderate amounts of explosive and 1 m lengths of advance. Vibrations, noise and settlements are monitored constantly. Once a month a longitudinal profile measurement is undertaken. This is used to check whether driving comfort on the motorway is assured. In order to avoid traffic being directly above the tunnel face, an electronic set of signals, controlled by the traffic police, has been installed on the motorway. If need be the lanes can be correspondingly aligned. The value of the contract (without options) amounts to roughly 104 mil. CHF (as of 2007 – without VAT) (Fig. 7).

The main work began in Camorino a year ago as well following the initial preliminary work there. The lake and river deposits from the Magadino Basin are some 200 m deep. Between the CBT portal and the cantonal road fine sands and (organic) loams intersperse following the first 6 to 8 m thick layer, which is rich in gravel. These reveal extremely poor geotechnical values. Settlements of up to 80 cm are expected, which will extend at both sides for several 100 m. The development of the settlements caused by prior factors corresponds with expectations.

The Camorino construction site in the interim possesses an area of around 500,000 m². In 2009, various major schemes were awarded: undercutting the cantonal road, the bridge above the A2 motorway, the existing route from Giubiasco Station towards the CBT’s north portal and a new bridge over the River Morobbia. Work has started on all these contract sections in the meantime.

Invitations were requested to tender for the main contract section (L 852) in March 2008. Following meticulous assessment the administrative board of the ATG awarded the construction work worth around 1 bill. CHF (as of 2008 – without VAT) on June 11, 2009. The contract section includes the drive to the north (about 2 x 8 km via drill+blast) and to the south (approx. 2 x 6 km via drill+blast) starting from the bottom point of the FIS in Sigirino, securing the support, sealing, drainage, lining, inner supporting and roughwork furnishing. Start of construction (installation work) began in November 2009. Initial blasting for the drive commenced in mid-April 2010. 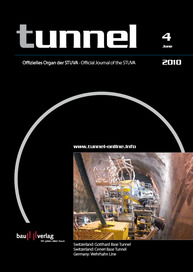 Switzerland: Stage reached by Work at Gotthard Base Tunnel

Switzerland: Overview of the Ceneri Base Tunnel Project

The ramps of the present-day rail routes at the Ceneri amount to up to 26 %o - the same gradients that are to be found at the Gotthard. The building of the Gotthard Base Tunnel alone would not have...

At the end of December 2011, as foreseen 670 m of the 15.4 km long Ceneri Base Tunnel had been excavated by drill+blast for the north drive started in June 2009 at Vigana (Camorino). At the beginning...

The CEO of the AlpTransit Gotthard AG Renzo Simoni reported on progress achieved in building Switzerlands biggest construction project during the premiere of the 2009 AlpTransit annual film on March...