2011 flood crisis in Bangkok and other major provinces is considered the worst natural disaster in recent Thai history. With damage totaling 1,000 Billion Baht, adverse impact of this disaster is extremely significant for Thai economy and daily life of the citizens. There are also intangible damages apart from the tangible losses.

There are several factors contributed to the severe flooding in upstream provinces and Bangkok itself. Among them, 2 key responsible factors are

As we all know, climate change is causing excessive rainfall in many parts of the world, which is a natural phenomenon beyond our control. However, we have to defend this severe natural disaster by improving flood drain system. Three major systems should be used to improve flood drain or flood way.

These 3 systems of the table should be integrated to optimize the investment cost. Type 1 should be used in upstream area or suburban area of provinces in northern Bangkok. Type 2 can be used in both suburban and urban area. Large Flood drain tunnels are considered practical, most effective and hence the best solution to prevent major flooding in the long term.

Using diaphragm walls (underground earth-retaining walls), cut-and-cover tunnel could be constructed beneath the existing Eastern Outer Ring Road. Using special but common construction method called “Top-Down Construction” (similar to method adopted for construction of subway station underneath Bangkok roads), this system will have minimum impact on current use of Outer Ring Road during construction. This system will also minimize the cost of land appropriation; the major part of the flood drain tunnel will be underneath existing road (motorway).

Upper Deck – will be used as road tunnel in normal condition, no flood or minor flood as shown in Fig. 3 and during moderate flood Fig. 4.

Lower Deck – will be used as flood drain in normal condition, no flood or minor flood as shown in Fig. 3 and during moderate flood Fig. 4.

Upper Deck – will be stopped using as road tunnel or underground motorway and will be used as flood drain or flood way once major flood comes.

Total length of this underground system is approx.100 km depending on the final selection based on further feasibility studies.

In some difficult area where cut-and-cover tunnel is not applicable, bored tunnels using TBM may be used to construct the underground flood drain tunnels.

MUSTS integrated with other Systems

Multi-Service Flood Tunnel System (MUSTS) will be integrated with Type 1 and Type 2 as appropriate in both provinces in urban area of Bangkok. In Bangkok, in addition to existing Type 1 system, large to medium diameter (3 to 5 m) inlet flood tunnels will be constructed to drain the runoff water from critical flood prone area into MUST during rainy season and during storm or flash flood – please see Fig. 5.

Drained water from MUSTS can be further utilized to produce hydro-power as can be seen in attached sketch (Fig. 6 ).

Depending on the selected size of the project, electricity of 400 to 600 MW can be produced by extended application of MUSTS as Multipurpose Underground System.

Minimum land appropriation is required – practical for existing land use in Bangkok and nearby provinces.

Can be integrated with existing drainage system to enhance flow rate in existing system.

Minimum land appropriation is required – practical for existing land use in Bangkok and nearby provinces.

Can be applied as multi-service system for maximum benefits for the public. 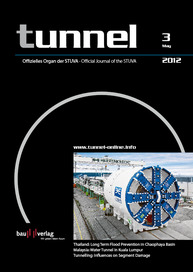 Greetings from Thailand. The World Tunnel Congress and 38th General Assembly (WTC 2012) will be held in Bangkok from 18th to 23rd May 2012. This is the first time that Thailand will host the ITA-AITES...

Start for new Metro Line and Extension Projects in Bangkok

In 2017 and 2018 work on several new metro line and extension projects will either be started or are currently underway in Bangkok. Services of these new lines and extensions will commence between...

In January 2020, TBM manufacturer Terratec joined workers and officials in celebrating the breakthrough of the 6.39 m diameter S70 EPB machine by contractor Italian-Thai Development PCL (ITD) on one...