On April 9, a seminar-workshop was held in Düsseldorf by the STUVA in conjunction with the VDV – the Association of German Transport Companies (Fig. 1). The topic was: “Availability of Public Transportation in critical Situations”. It looked at how public transportation systems in general and metro systems in particular can be produced more resiliently – i.e. to provide more resistance – in future. Against the background of ever-growing numbers of passengers on the one hand, and various possible scenarios such as natural catastrophes, technical mishaps and terrorism on the other, the aspect of “securing availability” is becoming an increasing concern for transport companies.

Resilience concepts are expediently devised on the basis of the resilience cycle, following up on continuous improvement (Fig. 2). Step 1 is concerned with avoiding an incident occurring in the first place. The second step relates to ensuring measures are available so that an incident can be successfully dealt with. Step 3 involves attempting to make sure that public transportation systems can be restored in a manner that is as straightforward as possible. Step 4 can be accomplished better following up on the previous ones. The cycle starts all over again.

What is remarkable is that thanks to the new “Ordinance on the Construction and Operation of Tramways” – BOStrab (2016) there is already a legal basis in existence. As a result, measures devised to enhance resilience are eligible to be funded. For according to §, Section 1, Point 8 “Operational Facilities and Vehicles … in particular must be constructed in such a way that operational failures can be speedily rectified”. This can for example, refer to additional points being available so that a track can be prepared for emergency services (in the opposite direction), thus enabling the rolling stock on the network to be sorted out (Fig. 3).

In future, it will be an essential task for public transport companies or owners of such structures to ensure that findings on long-term scheduled repair and redevelopment work to tunnels and stations are available at short notice in the event of unexpected incidents. Against the background of climate change and resultant heavier precipitation, the protection of metro systems against flooding has become more important than ever. What are, in some cases, extensive protective measures in the form of bulkhead doors at the ramp structures etc. are already commonplace either at the planning stage or under construction.

The event was staged within the scope of the U-THREAT project, which is promoted by the Federal Ministry of Education and Research (BMF) in the field of “Research for civil Security”.

Further details on the outcome and contact data available at: www.u-threat.com 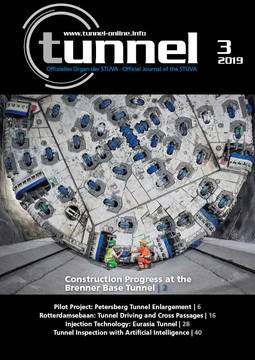 The improvement of the resilience of underground public transport systems is the main focus of a new research project, which has been coordinated by the STUVA e. V. since 1 August 2017. The project...

The exercise took place during the nocturnal closure to traffic of the Lyon Metro on the night of 8 to 9 October 2019. In the exercise scenario, a train is immobilised between the Place Jean...

Albert Einstein once asserted that you recognize a really good idea by the fact that it seems to be impossible to be realized from the very outset. This quote often characterizes the activities of...

On August 27 and 28, 2015, a two-day conference was held in Berlin on Complete Accessibility in Public Commuter Transportation (PCT). 61 participants attended an interesting programme, presented...

DIN 4150-2 Vibrations in the Construction Sector; Effects on People in Buildings is being revised

Mechanical low-frequency vibrations caused by construction activities, blasting an traffic on  rails and roads no only represent a threat to the stability of buildings. Furthermore, such vibrations...