The Katzenberg is Germany’s third longest rail tunnel. Since December 2012 trains have sped through the almost 9.5 km long rail tunnel at speeds of up to some 250 km/h. For this purpose the high-speed overhead contact lines Re 330 were anchored to the segments with bolts for the first time in Germany.

This new and partially upgraded route between Karlsruhe and Basle is numbered among Europe’s most important rail arteries. It now possesses 4 tracks to increase capacity and top speeds on the RhineValley line thus optimising rail transportation in the region as a whole. One of the most important... 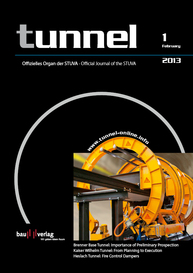 The city of Brisbane on the East Coast of Australia is Queenslands industrial, economic and financial center. Many service companies are located in the city center. Brisbane Central Business...

Economic Fixing of Operating Systems for Tunnels with segmental Lining

Owing to increased requirements posed on operating technology and safety in traffic tunnels (RABT 2006 and Direc-tive 2004/54/EC) an ever greater number of installation systems must be taken into...

In Europe Spain has the longest route network for fast links by rail involving more than 2,000  km  with Madrid as the hub for rail long-distance traffic on the Iberian Peninsula. The high-speed...

With approx. 1.4 % of the surface area of South Africa, Gauteng is the countrys smallest province in terms of area. However, the province contains nearly 20 % of the countrys population. Because...