At the end of 1999, the 19 km long Vereina Tunnel in the Canton of Graubünden was opened by the Rhaetian Railway after eight years of construction, thus providing the required all-year round link to the canton’s economic centres and further on towards Zurich and St. Gallen. Some 2100 l of water flows out of the tunnel per minute at the north portal. The energy potential of this water which has a temperature of 17 °C is now to be exploited for the geothermal generation of power using a heat pump. Towards this end, the Zurich Electricity Works (EWZ) at Klosters is establishing a district-heating network with back-up woodchip heating. The municipality of Klosters concluded a contract for the supply of heat with the EWZ for 11 sectors within its boundaries back in 2013. 40 further sectors followed in the course of this year. As a consequence, there are no longer any obstacles standing in the way of exploiting heat generated from the Vereina Tunnel. In this connection, around 11.5 million euros will be invested and between 800 000 and one million litres of heating oil replaced each year. The EWZ is scheduled to apply for building permission in the course of this year. The first supplies of energy are expected at the end of 2015. 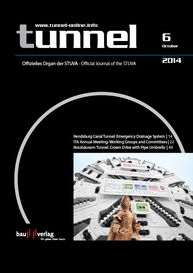 Intermediate Financing for the Zurich DML

The Zurich cross-city link (DML) embraces the new Zurich-Alstetten  Hauptbahn-hof  Zurich-Oerlikon railway route, the 4-track underground through station Löwenstraße as well as the extension and...

The newly built operations control centre Betriebsleitzentrale (BLZ) in the Canton of Graubünden will operate 24 hours a day for the safety of all national and cantonal roads and will also support...

A Vision for Construction underground

The deep geothermal exploitation of energy in the form of heat and electricity is bound to grow considerably in significance both ecologically and economically in future owing to the scarcity of...

Thanks to the logging of data from the operation of the Jenbach thermal power plant since 2012, and also from additional tests, it is now possible to make more detailed statements about the energy...