The 32.8 km long Koralm Tunnel in Kärnten and Styria will be the longest rail tunnel in Austria, representing the core of the 130 km long, twin-track Koralmbahn Graz-Klagenfurt, currently under construction. This high-speed route (200 km/h) involves total investments in excess of € 5 billion. It provides the main link between the Baltic and the Adriatic (TEN Corridor 23) and is a central project of Austria’s infrastructural development. After concluding prior investigations (Leibenfeld, Peierdorf and Mitterpichling exploratory tunnels and the Peierdorf exploratory shaft) and the granting of the building permit in late 2007, work began on the 2 tunnel bores in 2011 with the roughwork due for completion in 2018.

The 2 tunnel bores for the Koralm Tunnel with a centre distance of roughly 40 m are linked every 500 m by cross-passages with a more than 900 m long emergency stop foreseen at the centre of the tunnel. The altogether 32.8 km long tunnel is split into 3 sections, with the roughly 19 km long central contract section KAT2 the longest one: the 2 parallel single-track bores with an excavated cross-section of some 82 m² are to driven by mechanised means with tunnelling machines towards Kärnten mainly through crystalline rock (glimmer slate, gneisses etc.) by 2016 (30 m/day). The tunnel bores of contract section KAT1 (4.1/5.1 km) are driven cyclically (NATM) from the Leibenfeld ventilation shaft and those of contract section KAT3 (roughly 11 km) either mechanically or cyclically.⇥G.B. 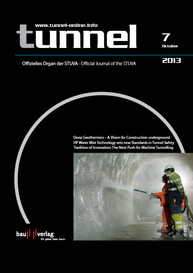 The Koralm Tunnel represents the core of the new 130 km long Koralmbahn, being set up between Graz and Klagenfurt, a twin-track high-speed line designed for speeds of up to 200 km/h estimated to cost...

The Koralm Railway is the extension of the trans-European corridor VI and part of the axis from Danzig via Warsaw and Vienna to Triest, Venice and Bologna, in other words the link between the Baltic...

The Südbahntagung conference was initiated in 2008 as a forum at which findings and case studies on major tunnelling projects in Austria such as the Semmering Base Tunnel, Koralm Tunnel and the...

One of the worlds longest tunnels is being produced: the Koralm Tunnel in the south-east of Austria will link Styria and Kärnten and reduce the travel time between Graz and Klagenfurt from 3 hours...

Granitztal Valley Chain of Tunnels The Granitztal Valley chain of tunnels represents part of the 130 km long Koralmbahn Railway between Graz and Klagenfurt. It is located in the 7.8 km long section...