For four decades, from the first issue in 1982, Roy Forbes translated technical articles for tunnel. He passed away on 31 July 2021 at the age of 78
Credit/Quelle: privat

For four decades, from the first issue in 1982, Roy Forbes translated technical articles for tunnel. He passed away on 31 July 2021 at the age of 78
Credit/Quelle: privat

Roy Forbes was a versatile, well-read and curious person in the best sense of the word – energetic, fun-loving and optimistic. He was born in Dunfermline, Scotland, in 1942. His professional career in Scotland was short-lived –

just before his 19th birthday, the young assistant teacher went to Germany and was to stay there.

He found his first job at the Berlitz language school in Remscheid. In 1966, it was off to Cologne where Roy Forbes began work at the foreign broadcaster Deutsche Welle, where he started as a translator and speaker. As an editor and later chief of staff, he was part of the Africa department, where he dealt with a wide variety of topics, from politics to sports to gastronomy, and got to know the African continent as a journalist on his travels.

Roy Forbes also worked as a freelance journalist and translator: for example, for Deutschlandfunk, the Goethe-Institut and, from 1978, for Bertelsmann Fachzeitschriften –

now the Bauverlag. He did translations for tunnel from the first issue in 1982 and did not stop doing so even after his retirement in 2001. He translated for tunnel for two more decades, simply because the subject fascinated him.

Roy Forbes was laid to rest in the closest circle of his friends and family: wife Margot, daughter Caroline and his grandchildren Liam and Dylan. 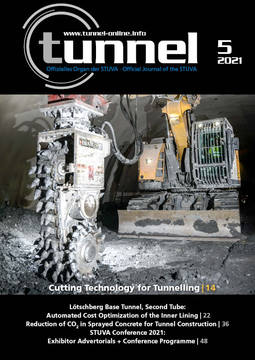