A Haven for Hydropower

Norway’s hydropower production capacity of 140 TWh covers more than 94% of the total electricity usage in the country. The vast majority of powerplants, however, were built before 1990.  Many of these large schemes, such as the Svartisen Hydro Project, utilized large tunnel boring machines to excavate many kilometers of headrace and tailrace tunnels in hard rock.

As more and more of the country’s water features were harnessed for hydropower usage, public resistance grew. In the mid-1990s then-Norwegian Prime Minister Jens Stoltenberg declared the era of big hydropower construction over.  Nevertheless, developers recognized that the Norwegian topography represented a major potential for hydropower, especially if a solution with fewer environmental impacts could be found.

However, there was one problem for very small diameter tunnels: The most common blasted cross section is between 16 m2 and 25 m2, but due to limitations in the available equipment, cross sections with smaller diameter than 16 m2 cannot be excavated efficiently in Norway by drill & blast. To work around this, small specialized TBMs are now being used, which reduce the amount of excavated material and allow these previously marginalized projects to become reality.

While other methods such as horizontal directional drilling are being used, TBMs offer some significant advantages. Due to the relative lower surface roughness of the tunnel wall in a mechanically excavated tunnel, the water flows better, and the needed cross section can be reduced by between 40 and 60 percent (see Fig. 2).  Less rock support is required in general, and because of the better tunnel quality there are lower lifecycle costs to maintain the tunnel. Mechanized tunneling also disturbs the environment far less than drill & blast operations.  The TBM and muck haulage are typically run on 100% electric from the grid. In addition, there is less excavated material to deposit during mechanized tunneling, and use of a TBM also eliminates the risk of nitrous run off and plastic waste from D&B deposits.

The empirical data from TBM-excavated hydropower projects in Norway support these points. Results show that there is a reduction in installed rock support of between 40–90% when boring a tunnel with a TBM instead of blasting it. The theory behind this result is that a lot of the rock support in blasted tunnels is installed to stabilize rock that has been damaged by the blasting. The TBM-bored tunnel walls are less damaged, leading to lower maintenance cost of the tunnels and longer tunnel life.

In 2018, contractor Hardanger Maskin AS approached Robbins with a challenge: A series of tunnels located near Sogndal, Norway ranging from 640 m to 2100 m long in granitic rock with RQD of greater than 75 percent. Due to local terrain, the tunnels would have a small launch area of 4 m x 10 m, and the tunnel slope on the first, 640 m long drive would range from a slight upward tilt to 45 degrees at the breakthrough. The project, known as Holen Hydropower for local utility Småkraft, would increase power to their mainline.

Robbins developed a new solution using Small Boring Units (SBUs). The Double Shield Rockhead (SBU-RHDS) provided for the tunnel includes 14-inch diameter cutters and is capable of self-propelled excavation using a gripper system. Torque is achieved through an internal drive motor. The novel 2.0 m (78-inch) diameter machine is equipped with unique features that allow it to drill at a steep incline, including electric power, modified oil and lubrication systems and a secondary safety gripper, as well as a water-based spoil removal system, developed by the contractor.

The Rockhead launched in July of 2018. As tunneling began and the slope was near horizontal, the contractor opted for a miniature loader for muck removal. As the tunnel got steeper, the secondary safety gripper system was put to the test. The safety grippers worked well – they were designed with interlocks to ensure the primary grippers were never released while the safety grippers were engaged, and with an additional safety mechanism allowing for mechanical locking in the event that hydraulic pressure was lost.

While the excavation rate of the machine was good, the novel design experienced some reliability issues during tunneling. Robbins Field Service were able to fix problems as they came up. Despite the challenges, the machine completed a daring hole-through at a steep 45-degree incline on January 1, 2019. It has since been relaunched to bore its second, 2100 m long tunnel, where the design continues to be fine-tuned.

The lessons learned on Holen Hydro translated well to a larger diameter tunnel project that launched recently in summer 2019.Robbins supplied the 2.8 m diameter specialized Main Beam TBM known as “Snøhvit” or “Snow White” to contractor Norsk Grønnkraft for use on several of their hydroelectric tunnels. In addition to investing in a TBM, Norsk Grønnkraft also started a specialized contractor NGK Boring that entered into a cooperation with Entreprenørservice AS to construct the tunnels.

The first tunnel, the 2.7 km long Salvasskardelva HEPP located in Bardu, Norway, has a modest positive gradient of 5.2%. The second tunnel, a 1.3 km long bore for the Veiski HEPP in Sørfold, Norway will be steeper with a positive gradient of about 9.2%. Future tunnels will have moderately steep gradients of less than 25%.

To combat boring on a grade, the small Main Beam TBM was designed for adaptability, with an option to add a safety gripper on future tunnels for boring at high grade.  In a unique twist, a continuous conveyor was provided for muck removal, making it the smallest conveyor belt Robbins has ever provided. The 450 mm wide conveyor belt was designed to minimize muck spillage in curves despite its narrow width. The small jobsite, only 85 m in length, also required the use of a double stack belt storage cassette standing 5 m tall, as normal cassettes require 100 m of horizontal space. The unique system is planned to be reused at each of the tunnel sites.

The small jobsite and terrain at Salvasskardelva meant the machine had to be launched from a launch frame, rather than a starter tunnel or trench with gripper walls. The adaptable frame, which allowed the machine to advance until it was well enough into the tunnel to grip the tunnel walls, is planned for reuse on subsequent tunnels as well.

During the launch Robbins personnel aided the contractor with conveyor setup as well as TBM launching. The conveyor was installed within three weeks and began operating after the TBM had bored ahead 100 m. The crown-mounted conveyor has an installation window for crewmembers to install additional idlers as the TBM bores forward.  As winter approaches, crews will install an enclosure around the conveyor drive section and belt splice stand with heating to stave off freezing temperatures.

As of early October, the TBM had surpassed the 1000 m mark and was excavating well in 150 MPa UCS mica gneiss and schist rock, with rates of above 100 mm per minute.

The Future of Mini-Hydro in Norway

Small diameter hydro tunneling looks poised to continue making a big impact in Norway. A third tunnel, the Tokagjelet HEPP, will begin excavation soon using a small, 2.6 m diameter Robbins Double Shield TBM with a safety gripper. The alignment of the 2.2 km long tunnel will increase gradually from near-horizontal to a 45-degree incline. Given the increasing interest in small hydro tunnels, and the fine-tuning of effective designs for rock tunnels at steep inclines, there is a huge potential for such projects throughout Europe and internationally. Renewable energy with a reduced initial investment and construction time could become essential wherever the terrain is mountainous and water features abound. 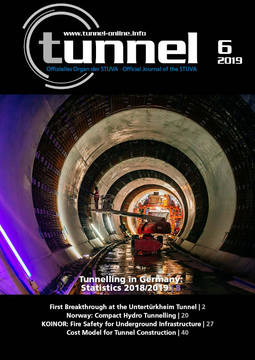 High mountains, long fjords and steep valleys. A demanding landscape and tough climate with abundant precipitation meaning infrastructure construction is a severe challenge in Norway, host of the...

For more than 20 years, NFM Technologies has been designing and manufacturing large diameter tunnel boring machines ranging from 4 m to more than 15 m, suited to all types of geology. The French...

25 000 viewers witness Breakthroughs Via live stream, around 25 000 viewers around the world watched the almost simultaneous breakthroughs. Not only for client Bane NOR and the joint venture...