The STUVA team would like to wish Prof. Martin Ziegler all the best on the occasion of his 60th birthday at the end of February. We take avail of this opportunity to thank our board chairman for the brilliant support and sovereign representation of the STUVA in public. Ziegler has represented STUVA’s interests for many years with heart and soul in this responsible position. In these fast-moving times, this is no mean achievement. But the same steadiness, the STUVA can rely on,  becomes apparent when one takes a look at Ziegler’s vita.

As far back as his days at the University of Karlsruhe during his engineering studies, he devoted his attention to soil mechanics, foundation engineering and rock mechanics. During the time he spent as a research assistant, he obtained his doctorate in 1986 with a dissertation on “Calculating Earth Pressure in Sand relating to Displacement” and then spent 13 years with the Philip Holzman Company. Since 2000 he has occupied the chair for geotechnics and heads the Institute for Foundation Engineering, Soil Mechanics, Rock Mechanics and Waterway Engineering at the RWTH Aachen. This is where he met the honorary STUVA board member Prof. E.h. Günter Girnau for the first time, who was so impressed by Prof. Ziegler that he invited him to join the STUVA board in 2001. Only two years later in 2003, Martin Ziegler was elected its chairman by the general assembly.

STUVA’s aims are identical with his own objectives: this was recently reflected during the STUVA Conference held in Stuttgart in late 2013. The Conference concentrated on the Stuttgart 21 mega project.  Addressing the more than 1600 participants, Ziegler again showed that he is not afraid to speak his mind and also tackle critical topics. In his opening speech the STUVA board chairman dealt with a subject that experts had already dealt with at the 2011 Conference and which is still gaining in importance: apart from the manifold technical challenges, which are posed by a tunnelling project of this magnitude, clients are increasingly being confronted by resistance on the part of the public. Ziegler was unequivocal in his address and called upon engineers but first and foremost politicians to ensure that citizens are properly involved from the very outset so that costs, restrictions and risks are put across honestly. He left no doubt, however, that it is the STUVA’s view that no one should obstruct progress for selfish reasons.

Martin Ziegler is a “really hard worker, highly precise and highly critical” – also when it comes to matters concerning himself, is what those in the know say about him. And even when placed under great stress he is always humorous. In spite of all his duties, he still finds time for sport. Anyone who has ever come across this man will be able to understand that abundant energy is still there.

Steady as a rock he may be but he’s still most adventurous and involves himself in many posts within and without the technical university. He is a member of several boards and chairs some of them and at the end of 2013 founded the Ingenieurbüro ZAI together with his former associate at the Institute, Dr. Benjamin Aulbach.

“Grasp the subject – the words will follow”, is a saying attributed to Marcus Porcius Cato (234-149 BC) and the phrase is confirmed by Ziegler’s activities. He is able to present facts precisely and to aptly put them across. By now he has been responsible for more than 150 publications (sometimes as co-author). His works are known for being well-founded; Ziegler has always maintained and consolidated links to practice. This has been accomplished on the one hand in the form of practice-related research topics as well as through his permanent position as an expert and consultant.

We would like to wish Prof. Ziegler all the best in furthering his projects and the best of health for the years to come, which we trust will see his association with the STUVA continued. 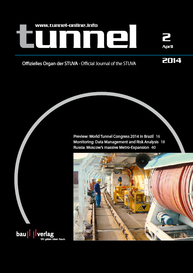 Within the framework of the Centre for German and International Foundation Engineering Law Inc. (CBTR) conference in Vienna, the foundation engineering law prize was presented at the end of June. The...

In his acceptance speech, Felix Amberg permitted himself a look back in two regards. His comment on his own suitability as winner was a semi-serious "my God, am I that old?" But he didn't only see...

Sebastian Kube received the prize for his contribution Electrical Resistivity Measurements to Describe Particle Incorporation during Penetration of Bentonite into Cohesionless Soil. Sophie...

The long-standing head of the City of Dortmunds foundation engineering office stepped down from his position on March 14, 2014. Schließler is now semi-retired, having entered the passive phase of...