The 11th InnoTrans wound up after four action-crammed days on September 23 with its best ever result. New records were recorded for exhibitor and trade visitor participation. Some 145 000 trade visitors from more than 140 countries attended this year’s leading fair for transport technology in Berlin; 2955 exhibitors from 60 countries displayed their products on the fairgrounds.

The “International Tunnel Forum”of the STUVA (Research Association for Tunnels and Transportation Facilities Inc.) was again a feature over two days at this year’s fair. It was presented by STUVA CEO Dr.-Ing. Roland Leucker. Almost 100 participants attended the first forum on “BIM – an added Value for Tunnelling?” in the CityCube. At the forum, discussions concentrated on how this planning method can be appropriately applied given the special marginal conditions presented by underground construction. According to Dr.-Ing. Peter-Michael Mayer, in charge of the tunnelling division with the Ed. Züblin AG, a BIM model should be created during the design and approval planning phase by the client and not subsequently by the responsible contractor. Dipl.-Ing. Dirk Schaper, CEO of the Hochtief Vicon GmbH described parallel or subsequent modelling alongside 2D-planning as “playing with BIM”. According to Schaper going the extra mile is only worthwhile providing that BIM was completely integrated in the planning. This extra effort lies within a range of 20 to 30 percent according to Dipl.-Ing. Marko Žibert (head of tunnelling and geotechnics, partner, ELEA iC d.o.o. Civil Engineering and Consulting).

BIM cannot be implemented immediately but has to be introduced step-by-step, starting with the “little closed BIM” application right up to “big open BIM”, which Žibert maintains should be the ultimate goal. It is hoped that by applying BIM, coordination will be achieved for the various segments of tunnelling so that inconsistencies can be resolved at the planning stage. Furthermore, BIM can also help create international standards in this respect, which are lacking in tunnelling.

The Deutsche Bahn BIM pilot projects are regarded by Dipl.-Ing. (ETH) Heinz Ehrbar, head of management for major projects with the DB Netz AG as a “great opportunity” to consolidate know-how and lay the foundation for applying BIM in Germany. He feels that within a period of five years, the country could be among the leaders in this field of technology – although at present the application of BIM in the UK must be taken as the benchmark.

The round of experts agreed that BIM cannot be seen as a cure-all capable of automatically resolving mediocre contracts or conflict-laden partnerships. Although BIM is still in its infancy in tunnelling, Heinz Ehrbar is certain that this development can indeed be “advanced faster than we believe at present”. No one questioned the decisive role that BIM will play in tunnelling.

The second tunnel forum on September 22 dealt with the question of “Underground Stations – a special Safety and Security Risk?”. In addition to operational-technical safety, personal security has increasingly come to the fore in recent decades. Current developments in this field were discussed as well as the possibilities offered for design, which are already available for new structures or redevelopments.

Roland Leucker responding to the question of what made an underground station non-secure, explained that a distinction had to be drawn between actual and envisaged security. Apart from factors of influence such as the presence of staff and police as well as technical facilities such as video monitoring and emergency call stations, the station’s architecture also exerts an influence, which must not be underestimated. Han Admiraal, chairman of the “ITA Committee on Underground Space” (ITACUS) pointed to the psychological effects of open architecture, which are visibly linked to the surface. An oppressive, confined atmosphere represents a decisive factor of influence, which can prevent people from using underground transportation systems, simply because they do not feel secure. Alongside lighting and climate control, optimised signposting is necessary: “Anyone unaware of where he must go will feel uncomfortable”, Admiraal declared simply and plausibly. 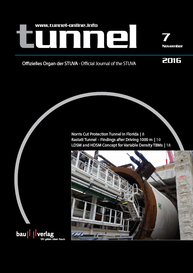 Going deep at the 2016 InnoTrans

The new Gotthard Base Tunnel can lay claim to many things: its the worlds longest and deepest rail tunnel, a milestone for the environment and economy. However, first and foremost it provides...

Topics that captivate the Industry

The start of the 2012 InnoTrans is looming ahead. During the 4 exhibition days from September 18 to 21, 2012 more than 2,400 exhibitors from 47 countries will present their innovative products and...