Some 700 km of metro, urban railway and light rail tunnels, 680 km of main line as well as 320 km of road tunnels: transport tunnels with a total length of some 1700 km have been built in the Federal Republic of Germany according to current figures provided by the STUVA, the Research Association for Tunnels and Transportation Facilities Inc. And there is a growing need – not just seen nationally. According to a study by the International Tunnelling and Underground Space Association (ITA) every year some 4500–4700 km of new tunnels are added to the existing ones. These figures on the one hand demonstrate the dynamism of the tunnel construction market. However, given an estimated life cycle of over 100 years, tunnel maintenance and repair issues become increasingly relevant.

The 2016 InnoTrans in Berlin will again provide plenty of scope for tunnel technology reflecting global market requirements from September 20 to 23, 2016. In the fair’s special Tunnel Construction segment, numerous companies from the industry will present international trade visitors innovative solutions at the Berlin fairgrounds: from building products and materials by way of tunnel boring machines and equipment for conventional drives right up to communication and safety technologies as well as cleaning systems.

This year, many tunnelling exhibitors are dealing with the topic of fire protection and with active and passive approaches. The Zapp-Zimmermann GmbH has been engaged in this field for all of 25 years. The company will be appearing at the InnoTrans for the first time in September. It will be displaying special fire protection systems in the Tunnel Construction Segment, by means of which cable and pipe feeds in tunnels, trains and station buildings can be secured against fire. According to CEO Marc Zimmermann intumescent fire protection materials that can be universally deployed will also be on show. These are resistant to external influences and mechanical loads. The Tunnel Construction segment continues to reveal its significance at the 2016 InnoTrans. The names of numerous national and international tunnel exhibitors are to be found on the list. They include: Herrenknecht AG, Niedax GmbH & Co. KG, Pöyry Deutschland GmbH as well as the Korea Railroad Research Institute and Consilium Marine & Safety AB from Sweden.

The Tunnel Construction Segment will be accompanied by the International Tunnel Forum. The STUVA will be organizing this event for the sixth time. It provides trade visitors with a platform for a qualified exchange with experts from the branch on topical themes. This year, the speakers will deal with various issues such as “BIM – An Asset for Tunnelling”? or “Underground Stations – A particular Security Risk”? STUVA CEO Dr.-Ing. Roland Leucker will chair the event. 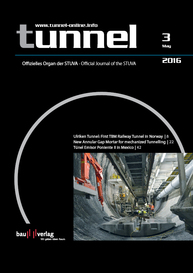 In less than a year, the who is who from the international railway industry will meet again from September 20 to 23, 2016, at the InnoTrans in Berlin. For many successful and ambitious companies from...

Fairs are numbered among the most important marketing instruments for companies. This applies especially to international front-runners such as the InnoTrans in Berlin. With over 2,500 exhibitors from...

Going deep at the 2016 InnoTrans

The new Gotthard Base Tunnel can lay claim to many things: its the worlds longest and deepest rail tunnel, a milestone for the environment and economy. However, first and foremost it provides...

The Support Association for Structural Engineering of the University of the Bundeswehr (UniBW) Munich staged the 4th Munich Tunnelling Symposium at the end of May in collaboration with the Research...

The 11th InnoTrans wound up after four action-crammed days on September 23 with its best ever result. New records were recorded for exhibitor and trade visitor participation. Some 145 000 trade...