The rail route between Hanau and Nantenbach is part of the 112 km long Main-Spessart Railway between Hanau and Würzburg. It is used by more than 200 trains every day and passes through the Schwarzkopf  Tunnel built in 1854, which is 926 m long. This tunnel is in urgent need of repair as it possesses a narrow clear section and is only suitable for heavy goods traffic with an additional locomotive pushing the train, owing to the steep Spessart ramp with partly more than 20 ‰  inclination. Furthermore, the speed is restricted to 70 km/h. Rather than this renovation scheme, a new route between Laufach and Heigenbrücken was decided on to eliminate the Schwarzkopf Tunnel. This project is contained in the Federal Transport Plan and entails a roughly 8 km long, twin-track upgraded route running from Hanau to Nantenbach.

Numerous engineering structures, some sophisticated ones, are needed here on account of the hilly terrain and the sub-surface. For instance, four new tunnels are currently being built in the valley parallel to the existing line and the federal highway 26:

The 745 m long Hain Tunnel is scheduled to be built by cut-and-cover by the end of 2015. It consists of a rectangular frame with two cells per tube.

The 629 m long Metzberg Tunnel is also scheduled to be driven by late 2015. However, it will be mainly tackled by mining means and possesses two tubes.

At the same time the Hirschberg Tunnel will be driven with two bores: the 375 m long southern one by trenchless means and the 525 m long northern tube, built by cut-and-cover due to the shallow overburden.

The 2623 m long Falkenberg Tunnel that follows to the south of the Schwarzkopf Tunnel runs through the Spessart Hills with up to 150 m of overburden. It will possess two single-track tubes with five cross-passages set at intervals of up to 500 m. On December 4, 2015, the breakthrough at the Falkenberg Tunnel was celebrated.

After securing the rock with shotcrete and installing the seal, the mined tunnels are lined with a reinforced steel inner shell. The future tunnel tubes have a roughly 48 m² cross-section. The tunnels are planned with single-track tubes to avoid pressure problems when trains pass one another. The two-track tunnels built by cut-and-cover possess a partition wall between the tracks.

After the start of excavation in mid-2013 and lining the tunnel interior as from 2015, the route development is intended to lead to a more efficient and faster link (150 km/h) by late 2017. Furthermore, noise emissions along the route will be considerably suppressed owing to the fact that it is mainly located in tunnels – certainly a plus point for local residents. Once the bypass link starts operating the entire existing route between Laufenbach and Heigenbrücken will be closed and the Schwarzkopf Tunnel filled in. 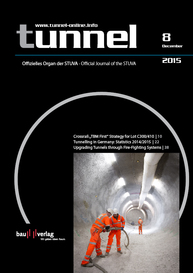 The Institute and Laboratory of Geotechnics of the Technical University of Darmstadt held the 23rd Darmstadt Geotechnics Colloquium on 10 March 2016, organised by Prof. Dr.-Ing. Rolf Katzenbach. In...

1 The Project in General The upgraded Hanau­Nantenbach line is part of the roughly 112 km long Main-Spessart route between Hanau and Würzburg. As this section has to cope with more than 200...