BASF Construction Chemicals’ business unit MEYCO Global Underground Construction, one of the world’s leading suppliers of technical solutions for TBM in underground construction, held the 3rd annual BASF TBM Conference 2009 in Singapore on 5th to 6th November (Fig. 1). BASF has previously presented TBM conferences in Europe in 2007 and in North America in 2008 – the 2010 event will be held most probably in the UK.
A total of 12 world-renowned speakers – including contractors, owners, designers, consultants and machine manufacturers – presented a widespread picture of specific TBM designs, state-of-the-art soil conditioning systems and their limits, Singaporean lessons learnt from key TBM tunnel projects and key performance indicators as well as safety issues (Fig. 2).
An attendance of nearly 200 selected participants from over 20 countries clearly underlined the international standing of this unique TBM Conference. In addition, the unrivalled location of the Jewel Box facilitated a relaxed but lively discussion between the senior managers, general managers, directors, CEOs, vice-presidents and presidents present. The Conference day was rounded off by an evening dinner with spectacular views over Singapore Harbour and various site visits the following day.

The conference presentations included:
“Overview of Singapore’s MRT System by 2020” by Ow Chun Nam, Director of Circle Line 4 + Downtown Line 3 of Land Transport Authority and President of the Singaporean Tunnelling & Underground Construction Society
Ow Chun Nam presented Singapore’s Land Transport Master plan, Singapore’s rail network, rail lines under development and challenges in construction and upcoming new lines. From the opening of the remaining sections of the Circle line in 2010, the presentation covered the period up to 2020 when the Eastern Regional Line is due to open. The current underground network will grow from 138 km to 278  km. Areas highlighted included tunnel alignment, the challenges of close proximity tunnels, bracing and GFRP dowels, tunnelling through built up areas, geological conditions and mixed face conditions.

“Ground Improvement Works in Singapore and New Solutions” by Kooper Kim, Manager Asia Pacific/MEYCO Global Underground Cons-truction – TBM & Civil Projects Manager
Kooper Kim looked at applications of ground improvement in Singapore MRT projects. Permeation grouting, rock grouting, fissure grouting, stage grouting and LW grouting in Singapore were discussed. The most commonly used materials were OPC, cement and Bentonite mix and Sodium Silicates. The new solutions – rock injection and soil stabilization with Rheocem and MEYCO MP320 – as well as their advantages were explained and examples of how these had been used in overseas projects were detailed.

“Zero Tolerance Safety Excellence Programme – A psychological approach of managing tunnel safety by changing safety attitudes, behaviour and culture” by Keith Jonson, Principal Consultant with Jonson Business Consulting Services of Sydney, Australia
Keith Jonson focused on changing unsafe attitudes, behaviours and culture to deliver safety excellence on tunnel projects. In Australia, despite an unprecedented expenditure on safety by construction companies, injury and fatality rates remained unacceptable. His company’s Zero Tolerance Safety Excellence Programme targeted the root causes and not the symptoms – unsafe attitudes are the causal precursors to unsafe behaviour. This was based on scientifically proven psychological principles: a long term proven track record of success generated a powerful positive safety culture; an acceptance of personal responsibility for safety; a risk assessment culture of how a company did business; and shop floor acceptance and compliance.

“Mechanized Tunnelling for New, Highly Efficient Infrastructure for Traffic and Supply Systems” by Dr. Karin Bäppler of Herrenknecht AG, Germany
Dr. Karin Bäppler looked at the demand for underground infrastructure and the newest techniques in mechanized tunnelling. This included hydroshields, convertible shields, EPB Shields and hard rock TBMs. Among the many case studies presented were: the world’s largest tunnel boring machines used in the Changjiang under river tunnel project in Shanghai, China. The two mixshields had a diameter of 15,43 m. The world’s largest EPB shield was used on a road tunnel in Madrid, Spain with a diameter of 15,20 m and was completed over three months ahead of schedule. The largest double shield TBM were used on the North-South Bypass in Brisbane, Australia had a 12,34 m diameter. The Gripper TBM (diameter 12,40 m) for the Jinping Hydroelectric Power Plant project in China is driving a tunnel of 15,90 m length through hard rock.

“Re-useable Draw-back TBM” by Yasunori Kondo and Yoshio Sakai of Kawasaki Heavy Industries Ltd.
Yasunori Kondo and Yoshio Sakai discussed the concept of a re-useable draw-back TBM from the angle of eco-consciousness and reduction of construction costs. Many parts can be reused and assembly and disassembly time can be reduced. The Gangnam project in Seoul, Korea was also introduced. This consisted of three tunnels of 1,185 m, 450 m and 1,570 m for power cables.

“From Laboratory Parameters to Risk Estimation in Hard Rock TBM Tunnelling” by Assistant Professor Pal Drevland Jakobsen from the Norwegian University of Science and Technology, Trondheim, Norway
Pal Jakobsen described the “Norwegian” Drillability Test Method for rocks. The determination of indices to characterise the drillability of rocks can be described by the Drilling Rate Index, Bit Wear Index and the Cutter Life Index. A Singapore case was described and use of the Fullprof software for the quick calculations of building time and cost was explained.

“Ground Conditions for TBM Tunnelling in Singapore” by Nick Shirlaw of Golder Associates, Singapore
Nick Shirlaw gave an impressive inside look at TBM Tunnelling in Singapore including the distribution of major geological formations, the general ground behaviour, the required face pressure and its relationship to surface settlement as well as abrasion in mixed face conditions and related damage to TBM.

“Key Performance Indica-tors (KPI) – Necessary Factors for Singapore’s Demanding Geology” by Tim Babendererde of Babendererde Engineers, Germany
Singapore’s typical geology was also the starting point for Tim Babendererde’s presentation. He discussed the need for face support; why face support application in soft ground tunnelling is a must; the evaluation of the support pressure; slurry issues and KPI for slurry as well as data monitoring. In his conclusion he stated that KPI have to be defined before tunnelling starts and that they should include warning and stoppage levels. “No data monitoring – No tunnel,” he added.

“TBM Design and Opera-tion – Oraki Main Sewer Pro-ject, Hobson Diversion, Auck-land, New Zealand” by Craig Bournes, Product Manager for Lovat Inc., Canada
Craig Bournes detailed this project to replace an above ground sewer and increase its capacity to reduce discharges during storm events. The 2,953 m long tunnel was at a depth of 22 to 80 m and had a minimum radius of 500 m and the maximum anticipated pressure was 3 bar. Detailed machine parameters as well as tunnelling parameters including correlations of torque, TBM speed and soil conditioning were presented. After 304 days, the project was completed 17 days ahead of schedule in March 2009.

“Onsite First Time Assem-bly of a Hard Rock Tunnel Boring Machine in Jinping, China’ by Dave Long, Project Manager of The Robbins Company, USA
Dave Long described the Jinping II project in China’s Sichuan province, a power station fed by four headrace tunnels. Due to a lack of local skilled workers, intense supervision was required. Some 16 expatriate supervisors from America and Europe worked on the site as well as 26 engineers, mechanics and electricians from Robbins, China. Considerable logistics planning was required due to the limited available space at the assembly site. Robbins concluded that onsite first-time assembly was an opportunity to complete tunnel boring more quickly and that it can be carried out in remote locations.

“Managing Commercial Risks on Tunelling Contracts” by John R. P. Battersby, Group Managing Director of BK Asia Pacific
John Battersby noted that risks should be allocated to the party who is best able to manage those particular risks. Actually, risks are passed on: by clients to contractors; by sub-contractors to sub-sub contractors regardless of who was best able to manage such risks. He detailed issues in risk management, contract administration, management of change by effective planning, programming and progress monitoring as well as sub-contract management and made numerous recommendations. 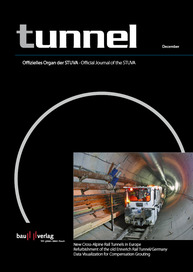 The 2013 STUVA Conference, the get-together for everything and everyone involved in underground construction, will take place from November 27  29 in Stuttgart. With the Conference and its...

Again in 2010 BASF invites to participate at the TBM Con­ference, this year from October 28th to 29th, in London. The Conference stands under the impression of the CrossRail project in Great Britain....

From April 2026, 2018, the World Tunnel Congress will take place at the International Convention and Exhibition Center in Dubai, UAE. The organizers, the national Society of Engineers  UAE and its...