The Swiss Federal Roads Office (FEDRO) has announced its decision to award the Gotthard main northern section to the JV “secondo tubo” (Implenia 60%/Frutiger 40%). The order for the 7.9 km long section, extending up to the lot boundary in the middle of the tunnel, is worth 467 million Swiss francs (485 million euros), construction is scheduled to take place from 2022 to 2029.

The core element of the work is 7.3 km of tunnelling, at a diameter of 12.3 m, using a tunnel boring machine (TBM) and segmental lining. This connects to a 160 m long stretch at the start which will be excavated conventionally. The contract also includes 430 m of conventional tunnel through the northern fault zone, which will be excavated from the 4 km long northern access tunnel that is currently being made. The TBM will later be pulled through this section of the fault zone. After a full revision of the cutterhead the TBM will then complete the excavation through to the lot boundary. The joint venture will also undertake a highly complex excavation for two underground ventilation centres, as well as creating an underground concrete plant and production halls for concrete segments and service ducts in former military caverns.

According to FEDRO, the JV secondo tubo was awarded main northern lot due to “a very good offer in terms of quality and price, making it the most favourable choice. The winning offer was impressive throughout, scoring well or very well on all the award criteria. The key personnel designated for site deployment also rated very highly.” 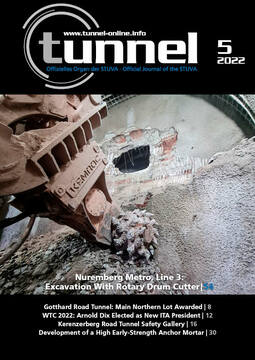 The core element of the work is 7.3 km of tunnelling, at a diameter of 12.3 m, using a tunnel boring machine (TBM) and segmental lining. This connects to a 160 m long stretch at the start which will...

The Förbifart Stockholm bypass is creating a new north-south link on the edge of Swedens capital. The Swiss construction and construction services company Implenia is to handle the first...

Having already won the contract for the Lot GC01 section of the Grand Paris Express project at the end of June 2016 (for which construction was scheduled to begin in October), Implenia secured a...