On 19 October 2022, the Karoline-Luise Tunnel was opened as the last part of the Combined Solution Karlsruhe
Credit/Quelle: Karlsruher Schieneninfrastruktur-Gesellschaft mbH

On 19 October 2022, the Karoline-Luise Tunnel was opened as the last part of the Combined Solution Karlsruhe
Credit/Quelle: Karlsruher Schieneninfrastruktur-Gesellschaft mbH

In mid-October 2022, the Combined Solution Karlsruhe was fully operational with the commissioning of the new road tunnel under the Kriegsstraße. The goal of the new infrastructure concept is to disentangle the inner-city tram and individual traffic and thus make it safer and more attractive overall. The project also includes a new rail track above above the tunnel. With the Karoline-Luise Tunnel, Karlsruhe‘s main traffic axis on Kriegsstraße between the Ludwig-Erhard-Allee junction and the Karlstor will be moved underground. The tunnel was built as a synthetic-fibre-reinforced concrete structure using the cut-and-cover method. The work was divided into ten individual construction sections with watertight excavation pits up to 9 m deep. These were lined with a concrete trough, which was later closed again with a lid. The new 1.6 km tunnel under Kriegsstraße in Karlsruhe relieves the city centre of through traffic
Credit/Quelle: Sika Deutschland

The new 1.6 km tunnel under Kriegsstraße in Karlsruhe relieves the city centre of through traffic
Credit/Quelle: Sika Deutschland

The coating of the tunnel walls in the north and south tubes was done with the products of Sika Deutschland GmbH. The high groundwater level also required effective joint sealing. High-performance Sika systems were also used here.

Specific guidelines for the use of waterstops apply to tunnel constructions in Germany. Road tunnels are subject to the ZTV-ING as well as the RIZ-ING guideline drawings. According to these, elastomer expansion waterstops in accordance with DIN 7865 are to be used to seal the block joints. The waterstops are additionally equipped with injection hoses that enable secure grouting in the event of water circulation.

In the Karoline-Luise Tunnel in Karlsruhe, Sika Waterbar waterstops were used to seal the expansion and space joints. For the scheduled sealing of the construction joints, the repeatedly groutable injection hose SikaFuko VT-1 was used, for which a test report from MFPA Leipzig is available for the groutability of a 30 m long section. Normally, these hoses are designed for 10 m. When grouting, the neoprene strips are compressed and the injection material can escape along the entire length of the hose through eight longitudinal gaps. Repeated grouting can be done by evacuating as needed. Together with the dispersion component Sika Injection-315 PM, the three-component polyacrylate gel Sika Injection-311 served as the sealing material. This acrylate material allows for multiple injections.

After the structural work was completed, the interior fit-out of the tunnel began. The coating work for both tubes was the responsibility of Heinrich Schmid GmbH & Co. KG. Water repellent Sikagard-740 W was used to permanently protect the walls against the penetration of chloride-containing water. The solvent-free, one-component hydrophobic impregnation based on silane is preferably used for vertical and horizontal elements of traffic structures and façades and also increases the resistance of the concrete to frost and de-icing salt cycles.

The surface protection system Sikagard-340 WCT was applied with two airless units on a trailer in parallel on the right and left tunnel wall
Credit/Quelle: Sika Deutschland

The surface protection system Sikagard-340 WCT was applied with two airless units on a trailer in parallel on the right and left tunnel wall
Credit/Quelle: Sika Deutschland
Subsequently, the contractor applied the surface protection system. Two airless units on a trailer were used to coat the right and left tunnel walls in parallel. The two-component coloured epoxy resin dispersion Sika­gard-340 WCT was used here. It is especially suitable for the coating of tunnel structures; the fire behaviour is classified in fire class B. According to the manufacturer, the epoxy resin dispersion offers high carbonation protection and very good wet abrasion resistance. In addition, it has a high level of stability on vertical surfaces. „With this new product, we were able to easily achieve the high gloss level required by ZTV-ING, Part 5 Section 4 for tunnel structures,“ explains Heinrich Schmid. „This was the first time we coated a surface of this size with Sikagard-340 WCT. The extended pot life was an advantage with the double airless application.“ The coating could be reworked after only three hours.

The high gloss level of Sikagard-340 WCT provides greater brightness and thus enables energy-saving lighting. The tunnel coating is flame-retardant according to DIN EN 13501-1, and is extremely resistant to mechanical and chemical influences. Water is sufficient for cleaning; the addition of surfactants is not necessary. Checking the layer thickness of the surface protection system Sikagard-340 WCT
Credit/Quelle: Sika Deutschland

The doors and tunnel blocks in the escape route system were coated with SikaCor EG-5 in the colour green by the workers of Heinrich Schmid GmbH. The two-component, coloured top coat on an acrylic-polyurethane basis is mechanically resistant and can also be used as a marking paint. The application was carried out with a spraying system.

The gravel pockets and blowholes occurring in the exposed concrete were partially levelled with Sika Icoment-520 mortar. With the two-component fine filler for OS systems, formwork distortions can be largely levelled in a thin-layer application. It has a very good water retention capacity and, as a result, a shorter time required for post-treatment.

www.sika.de
This article appeared in 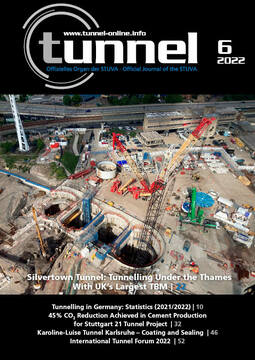 The prize was awarded on the one hand to the new construction project  Karlsruhe Combined Solution with its light-rail and road tunnel, and on the other hand to the  Karlsruhe Model as a...

When road tunnels must be renovated through being sealed then this can be attributed to 2 reasons: either leaks and moisture have spread in the tunnel in the course of the years  or, how- ever, some...

Tunnel sealing in the Far East

At present, the government of the city and island state of Singapore is massively expanding its transportation network to be able to do justice to constantly rising traffic volume on the rail and...

Stuttgarts Heslach Tunnel is the longest urban bi-directional tunnel in Germany. Around 50,000 vehicles use the centrally sited tunnel on a daily basis. It links the federal highway 14 with the...

After careful scrutiny, the Federal Council has reached the conclusion that the building of a second tunnel bore for the Gotthard Road Tunnel, which requires extensive redevelopment on account of its...