On October 10, 2012 the Austrian national committee of the International Tunnelling and Underground Space Association (ITA) staged its 8th Tunnel Congress at the Salzburg Congress Centre in conjunction with its members – the Austrian Society for Geomechanics (ÖGG), Austrian Tunnel Association (ATA), Austrian Society for Construction Technology (öbv), Austrian Research Society for Research on Road and Rail – Transport (FSV) and the Austrian Society of Engineers and Architects (ÖIAV). The Congress takes place there every 2 years in conjunction with the 61st Geomechanics Colloquy (October 11/12, 2012 – on this occasion marking 50 years of the NATM) – with almost 1,000 experts from 26 countries in attendance. To begin with the activities of the ITA and ITA Austria were dealt with (Prof. Robert Galler, Montan University Leoben). This involved the distribution of the publication “50 Years NATM – Field Reports” [3] to all those taking part.

The morning session dealt with changes to planning and execution (including special proposals) as well as alterations due to the encountered rock conditions.

Tunnelling on the VDE 8.1 Erfurt-Ebensfeld Rail Route taking the Example of the Eierberge Tunnel

The 3,756 m long twin-track rail tunnel with 3 emergency exits set 1,000 m apart is part of the new Ebensfeld-Erfurt route (107 km), a part-section of the German Unity Transport Project No. 8 (VDE) including the new/upgraded Nuremberg-Leipzig/Halle-Berlin line [4]. It was driven in 3 sections (crown, bench and floor) and is located entirely beneath the groundwater level. It has an excavated cross-section ranging from 160 to 180 m². Cyclical conventional drill+blast was applied and it was secured by the Austrian tunnelling method. The tunnel structure was formed to resist pressure resulting from the prevailing water pressures of up to 6 bar using a pressure-water retentive continuous seal with plastic sealing membranes and in situ concrete inner shell (45 to 95 cm). In order to be able to comply with a guideline (953.4101) which changed during construction, an integrated grouting system (Fig. 1) was planned and installed, which was used by the Deutsche Bundesbahn (DB) in this tunnel for the first time.

The roughly 1.4 km long twin-track tunnel with parallel evacuation tunnel and corresponding cross-passages for the Citybanan, Stockholm’s S-Bahn (main contract section B-9528) was mainly driven via drill+blast with lengths of advance of up to 5 m with the rock being sealed with steel fibre reinforced shotcrete with prior grouting involving an injection curtain extending up to 20 m.

Apart from 10 tunnel intersections a number of tricky undertunnelling schemes had to be tackled, e.g. involving the Maria Magdalena Church, Stockholm’s oldest, with self-drilling anchor grouting umbrellas above the tunnel to avoid priceless buildings being adversely affected by settlements. In this connection, details relating to planning and execution as well as investigations were presented.

The Pinglu Tunnel is part of the Yellow River Diversion Project (YRDP) and a major element of the 156 km long North Main Line. In this way, water from the Yellow River (48 m³/s) is to be pumped from the Wanjiazhai Reservoir to a higher-level plateau in the north-west of Shanzxi Province in the People’s Republic of China, where water is scarce in the 3 urban industrial centres of Taiyuan (4 million inhabitants), Datong and Suozhou (1.3/1.7 million inhabitants).

The 25.6 km long Pinglu Tunnel [5] starts to the north-west of Suozhou (Fig. 2), undercuts the city of Pinglu, possesses an inspection chamber at its centre and then runs westwards into the disassembly chamber. The mechanised equipment for driving the tunnel was made available by the client and was in some cases more than 10 year old so that it had to be processed and supplemented prior to use. This applied particularly to the TBM with 4.88 m cutterhead diameter with back-up system and ZED control. 6 train units cater for the logistics (excavated material, segments, pearl gravel and cement) at 22 to 25 km/h and there is a 540 m long inclined shaft to the inspection chamber at the tunnel centre.

The tunnel was lined with a hexagonal segment system (4+0; 0.25/1.20 m), the joints filled with a swellable substance to avoid loss of water through leaks. The segments were backfilled with pearl gravel immediately behind the ring sector and the annular gap grouted with mortar at the end of the back-up. Altogether 85,000 reinforced concrete segments were produced at a plant for prefabricated parts.

4 parallel running coal seams up to 12 m thick had to be penetrated, requiring modern gas detection technology (gas alarm) to be installed and precautions to be taken for ventilation purposes. Full-face coal extraction was carried out over 800 m sections (62 rings/d).

A number of geological problem areas had to be mastered during the driving operations over 25.6 km:

• Dipping of the TBM owing to strongly faulted and weathered zones (clayey silts with up to 45 % water content): creation of a 50 m long bypass tunnel after extensive exploration

• Penetration of karst structures, some filled with water, mud or large boulders

The Pinglu Tunnel was broken through after 49 months as scheduled with rates of advance extending from 530 to 1,700 m/month (max. 75 m/d) in November 2010 (Fig. 3) enabling the entire project to be completed in September 2011. The construction costs for the tunnel amounted to 84 million euros, roughly 3,300 euros per running metre of tunnel.

Many associate the “Stuttgart 21” project primarily with its best known element, the new Central Station in Stuttgart (Fig. 4). Actually the project consist of the 2 part-projects Stuttgart 21 and the adjoining new rail line between Wendlingen and Ulm [6].

The existing terminus station in Stuttgart is to be replaced by a through station – turned by 90° and set at a lower level. In future it will possess 8 tracks and 4 central platforms each 320 m long – with the new tracks relocated some 11 m deeper (Fig. 4). The new station will be linked in all directions to the regional and supraregional rail network via 4 access tracks at each end. The construction work for the Stuttgart deep-lying station including the access tunnels to the station at its north and south ends has already been awarded (300 million euros).

The Stuttgart 21 part-project also embraces 9 tunnels totalling 33 km in length – and a bored length of 55 km – namely the Bad Cannstadt Tunnel (3.8 km) and Ober/Untertürkheim (6 km) tunnels in the north, the Feuerbach Tunnel (3.2 km) in the west and the Filder Tunnel (9.5 km) – the longest – in the south leading to the Airport (Fig. 6) with a new underground airport station and running on towards Wendlingen through the Denkendorf Tunnel (700 m). The tunnels largely have 2 single-track bores, which are connected to one another by cross-passages. 90 % of the roughwork has already been awarded; services are scheduled to commence in 2020.

4 tunnels totalling 30 km each with 2 single-track bores (Fig. 6) belong to the 60 km long new Wendlingen-Ulm rail route adjoining towards the south: the Albvorland Tunnel (8.2 km) in the north, followed by the Boßler and Steinbühl tunnels (8.8/5.8 km) as well as the Albabstieg Tunnel (5.9 km) before Ulm. After carrying out geological investigations (swellable and compressive rock as well as karstification) construction work on these tunnels can now forge ahead. This high-speed line will enable travelling times between Stuttgart and Ulm to be cut considerably – from 54 to 28 minutes.

Innovation and Creativity for Project Optimisation in Tunnelling

After awarding the Innovation Prize (last section), the 2 persons responsible for chairing the afternoon session first turned to innovation and creativity for project optimisation in tunnelling.

According to Prof. Hans Georg Jodl from Vienna TU “tunnel projects require cooperation” for their development namely the collaboration of persons or groups given the presence of a common aim, autonomy with regard to taking decisions and action but mutual dependence for attaining the target, preparedness and will towards fair and open cooperation and mutual trust, for consensual actions and decisions are of benefit to both sides. Simplicity (rather than complicity), structure/order (rather than elaborateness/disjointedness) and brevity/conciseness (rather than verbosity) are what matter.

Then Prof. Walter Purrer from Innsbruck University provided examples of “Project Optimisation as System” with cooperation on the construction site [7] such as conflict management and dispute arbitration – and called for faith in the system (Fig. 7), the association of thought patterns (ARS) and contract rules (CONSTRUCTIO) with quality of cooperation.

In conjunction with various national and international attempts to improve “cooperation in construction engineering”, an ITA Austria working group devised a new award model for infrastructure projects (VIP), which currently is being discussed and further developed with clients’ representatives. The VIP is largely concerned with getting away from the currently prevailing “cheapest/best bidder principle”, in the case of which qualitative criteria have no or only a minor role to play. Greater emphasis is placed on qualitative criteria for awarding contracts and an effort is being made to commission the bidder whose offer affords the highest “benefit for society”.

This was followed by responses on the part of the client (Asfinag), the planner (ÖBA) and the contractor (Alpine Bemo Tunneling) with an ensuing discussion involving numerous suggestions and critical objections.

The prize for innovations from the field of planning and execution in tunnelling, which is of outstanding practical importance for tunnelling, was awarded twice this year (each involving 1,500 euros and a statue). These awards were for

• Alternative sealing connection of a plastic sealing membrane in cross-passages for a single-shell waterproofed segmental lining with up to 6 bar groundwater pressure.⇥G.B. 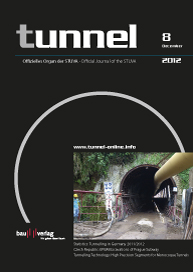 The annual geomechanics colloquium has developed as an important meeting point for experts in Central Europe. The event with the associated exhibition annually attracts over 800 participants, making...

The annual geomechanics colloquium has developed as an important meeting point for experts in Central Europe. The event with the associated exhibition annually attracts over 800 participants, making...

On October 12th, 2016 the Austrian national committee of the International Tunnelling and Underground Space Association (ITA) staged its 10th Tunnel Day at the Salzburg Congress Centre in conjunction...

The annual Geomechanics Colloquium in Salzburg has developed as an important meeting point for experts in Central Europe. The event with the associated exhibition usually attracts over 900...