“The final refusal to carry out the contractually agreed works and the subsequent loss of trust has unfortunately forced us to dissolve the contract with ARGE H51. Even with the prospect of the termination of the contract, ARGE H51 did not change its position and decided to make public its contractual interpretation. To ensure that the works for the Brenner Base Tunnel can continue as quickly as possible, an in-depth analysis of the entire project has already been started with the aim of launching a new tender procedure”, the two CEOs of BBT SE, Gilberto Cardola and Martin Gradnitzer, explained.

Shortly after the award of the largest construction lot in the Austrian project area, major differences of opinion had arisen between the contracting authority, BBT SE, and ARGE H51. BBT SE criticised that the ARGE H51 went public with their view of the situation “in a one-sided and very simplistic way, only mentioning the segment rings issue”.

BBT SE notes, however, that the problems did not concern technical issues, such as the segment rings: “The main reason for the dissolution of the contract was the final refuse to carry out the works and the delays occured with regard to some essential contractual aspects.”

The Dispute Over the Segment Rings

The invitation to tender, which was carried out under the technical direction of the former Board of Directors, provided that responsibility for planning and building the segment rings with a minimum of 40 mm of thickness lied with the contractor. Only after the award of the contract, ARGE H51 stated that the 40 cm segment ring – offered by ARGE H51 itself – was not feasible and requested either a thicker segment ring or the reduction of the loads at the expense of BBT SE.

BBT SE stated, that, as a contracting authority, they had repeatedly proposed solutions to the technical problems raised by ARGE H51 regarding the segment ring: “BBT SE very much regrets that ARGE H51 did not accept its support and that this led to serious delays in the Pfons–Brenner construction lot”

“We Had No Other Choice”

The two CEOs of BBT emphasised “As new CEOs we took over a difficult construction lot and worked hard for almost a year to find a solution. A contract worth a billion cannot be dissolved in a light-hearted manner; however, we had no other choice, because even the last solution proposed by ARGE H51 on October 5th 2020 was not viable from a technical and legal point of view.”

Now that the decision on the H51 lot has been made, BBT SE will complete the ongoing evaluation of the construction timetable, assess all possible measures and complete an updated construction program. On this basis it is currently being evaluated if the risk provision is sufficient to cover additional costs resulting from the dissolution and the adjustment for inflation.

“Failures of Management and Supervision Are Swept Under the Rug”

According to Porr, not only is the termination of the contract not legally covered, it is also highly irresponsible towards the Austrian taxpayers. It would make a delay of several years to this project inevitable, along with cost increases in the millions. Porr stated they had always been ready to render the requisite services and discuss any issues in addition to offering technologically sound solutions at no additional cost.

Strauss underlined that if BBT were to take safety concerns seriously, the Management and Supervisory board would have to admit that they had set parameters in the tender for cost reasons that would make the safe construction of the tunnel impossible if the applicable technical standards were upheld. “But since it is obvious that what is not allowed cannot be the case, they now want to save themselves by illegally terminating the contract”. 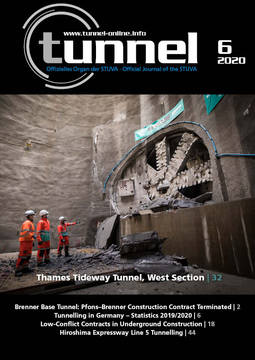 The BBT SEs Perspective: The final refusal to carry out the contractually agreed works and the subsequent loss of trust has unfortunately forced us to dissolve the contract with ARGE H51. Even...