In November 2014 the Deutsche Bahn commenced work on the Imberg Tunnel on the 60 km long new Wendlingen–Ulm rail route on the Alb Plateau. First of all construction pits were produced at both ends for the subsequent production of tunnel sections created by cut-and-cover. The tunnel will then be built by using the shotcrete method as from April 2015 onwards between the two cuttings produced by cut-and-cover. The two-track Imberg Tunnel is 499 m long, making it one of the shortest of the Stuttgart-Ulm rail project, and is located in the 21 km long Alb Plateau section’s second route segment. Construction of the Imberg Tunnel was awarded to a JV consisting of the Johann Bunte GmbH and the Stutz GmbH at the end of 2013 as a component of a part-section of PfA (planning approval section) 2.3 Alb Plateau.⇥G.B. 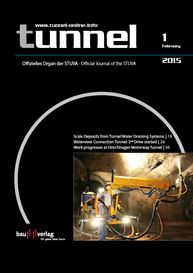 The DB Projekt Stuttgart-Ulm GmbH broke through the almost 220 m long mined section of the Imberg Tunnel on the new WendlingenUlm rail route on June 30, 2015 following a three-month construction...

New WendlingenUlm Rail Route on the Alb Plateau forging ahead

The Deutsche Bahn AG awarded the contract for the Merklingen-Hohenstadt route section of the new Wendlingen-Ulm rail route on the Alb Plateau to a JV comprising the contractors Leonhardt Weiss,...

The position of the tunnel in the second contract section of the around 23 km long plan approval section can be seen in Fig. 1. Topographical marginal conditions define the length of the 220 m...

1 Classification in the StuttgartUlm Rail Project The Stuttgart-Ulm rail project comprises two part-projects (Fig. 1). These are Stuttgart 21, involving the restructuring of the Stuttgart rail...

StuttgartUlm Rail Project: The Tunnel below the A8 Motorway on the Swabian Alb

The Tunnel beneath the BAB A8 The 377?m long, twin-track tunnel underpasses the motorway at a glancing intersection at the western end of the PFA 2.3 (Fig. 2). It was built in 10?m long blocks by...