Within the agreement, 14.2 billion euros will be invested in the construction of new transport infrastructure. No less than eight tunnel projects are included in this plan.

Investment in the Road and Rail Network

The ‘Denmark Forward’ plan seeks to improve a number of existing motorway links and roads, but also establish new roads. Denmark is faced with major traffic problems throughout the country, which pollute the environment with high CO2 emissions. With this proposal, the government presents its priorities for new investments and initiatives across the country, from investments in the road network, public transport and cycling, to initiatives aimed at, among other things, noise reduction, charging infrastructure and improved road safety.

Achieving these objectives will require a number of regional measures, in particular the construction of tunnel infrastructures from north to south:

The Marselis Boulevard Tunnel: a 2 km long tunnel planned a part of a new road providing a direct link between the E45 highway and the Aarhus harbour. Cost: 365 million euros. The port of Aarhus is the largest container port in Denmark, with a very high traffic density. A tunnel will help to provide a more direct connection between the port of Aarhus and the motorway network.

A third Limfjord crossing: A 20 km long four lane highway with a 600 m long immersed tunnel under the Limfjord will be built. Cost estimation: 940 million euros.

Extension of the Nordhavn Road Tunnel: a 1.4 km long tunnel will be built as an extension of the Nordhavn Tunnel to improve access to Nordhavn and Lynetteholm in Copenhagen. The Nordhavn Tunnel is essential for the planned urban development of the Copenhagen area Nordhavn. It is decided that the tunnel shall be established as a long tunnel from the existing Nordhavnsvej Tunnel to Kattegatvej’s extension, with preparation for a possible future Østlig Ringvej (eastern ring road). 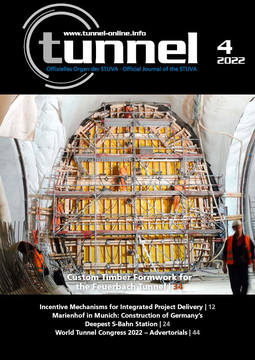 Construction of a Tunnel instead of a Bridge at Fehmarn Belt

Following one and as half years preliminary work with 20 possible tunnel routes and 16 bridge variants being scrutinised, the state-owned Danish planning company Fehmarn A/S has proposed a 17.6 km...

The overall Sibiu-Pite?ti motorway project represents an important section of the Pan-European Corridor IV. We are proud to now be taking on another essential part of this transport axis, says...

As part of the virtual World Tunnel Congress 2020 from 11 to 17 September, the General Assembly of the International Tunnelling and Underground Space Association (ITA) with representatives of the 78...