After commissioning two new Metro stations in Nuremberg, Germany, in mid-2008, two further construction sections for an extension were originally planned. One of these two sections – BBA 2.1 from Gustav Adolf Straße to Großreuth near Schweinau – has now been revised and adapted following legal proceedings before the Bavarian Administrative Court prior to being subsequently put on offer for a contract volume of 51 million euros. The contract was awarded to Bilfinger Construction. The project is due to begin in 2015 and should be completed in 2019.⇥G.B. 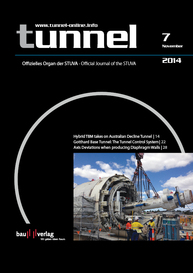 The engineering and services group Bilfinger has won an order in the Norwegian city of Stavanger for the construction of the Eiganes Tunnel which will significantly reduce the volume of traffic in the...

Extending the Metro Network in Copenhagen

Extending the Copenhagen Metro network constitutes part of the Danish capitals City Ring. Towards this end, two tunnels  1800 and 1600 m in length  are to be driven one after the other by...