The Olten–Aarau route is one of the busiest Swiss rail arteries; between Däniken and Wöschnau it narrows from four tracks to two. This bottleneck is to be eliminated by 2020 so that train services can be augmented. For comparison: instead of 510 trains per day (according to figures from 2010) 830 trains per day will probably use the route in 2030. It will cost a total of some 855 million Swiss francs (777 million euros) to upgrade the Olten–Aarau line for accommodating four tracks.

The 3114 m long Eppenberg Tunnel is to be the core structure of this project. Two evacuation and rescue shafts as well as an adit set some 800 m apart will serve as emergency exits and at the same time as accesses for the emergency services. The Marti Eppenberg JV commissioned with building the tunnel will drive it from the Wöschnau portal towards the west by mechanised means, employing a Mixshield (S 994; Herrenknecht AG) with a 12.75 m cutting wheel diameter, 3500 kW driving power and weighing 2400 t.

First of all, roughly 1.9 km of tunnel has to be excavated in hard rock. After conversion underground, an approximately 800 m long gravel section, partially located in groundwater, will be driven by a hydro-shield.

After the tunnel boring machine was approved at the factory in mid-July, assembly was due to start onsite in September 2016. In early 2017, the roughly 3 km long excavation is scheduled to begin and completed according to plan by spring 2018. It is estimated that the four-track upgrade will be completed and the opening of the Eppenberg Tunnel take place in late 2020. 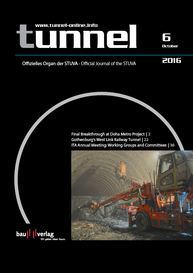 The railway line between Olten and Aarau is located on the main route between the cities of Berne and Zurich. On account of high demand for both passenger and goods traffic, the SBB is upgrading this...

The Eppenberg Tunnel with its connections to the existing track system is included in Lot A of the overall project. This project consists of the part-projects TP1 to TP3 and TP8, which are executed...