The Deutsche Bahn opened the new single-track Kaiser Wilhelm Tunnel on the Moselle route near Cochem on April 7, 2014. Work on the new 4242 m long tunnel started four years ago. It was produced by a TBM (April 10, 2010 to Nov. 7, 2011) involving a single shell with segments and linked to the existing tunnel by means of eight accessible passages. Since the new tunnel began operating the existing two-track Kaiser Wilhelm Tunnel dating back to 1877, which is more than 4.2 km long, has been renovated and modified for use with a single track. Train traffic is destined to run in two separate tunnels each with a single track as from 2016. Altogether the Deutsche Bahn invested some 210 million euros with about 135 million euros accounted for by the new Kaiser Wilhelm Tunnel. G.B. 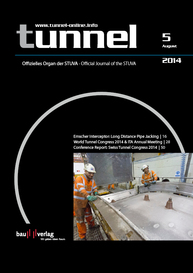 The KWT is currently being developed into a modern tunnel corresponding with the latest safety requirements. This report examines all project phases whilst concentrating on the extensive history...